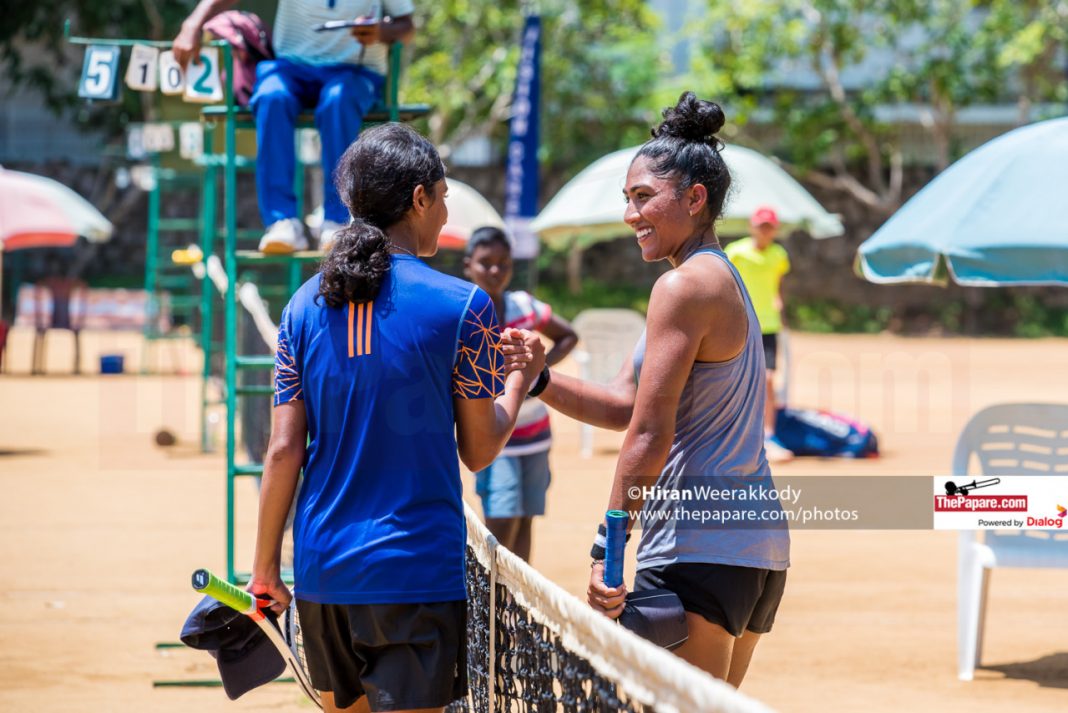 Anjalika Kurera defended her Colombo Championship Women’s Open title with a powerful performance against Rukshika Wijesuriya, claiming her 2nd Women’s title in the Category 1 tournament. The final was played yesterday at the SLTA Playing section courts.

15-year old Kurera has had a stellar season so far, winning an ITF Circuit series, representing Sri Lanka at the Junior and Senior Fed Cup teams this year and undoubtedly being the top performer for the side.

Kurera returned after her foreign tours to continue her form on Clay, and to retain her Women’s title at the Sri Lanka’s oldest Tennis Tournament, the Colombo Championships.

Opposing her was Rukshika Wijesuriya, an equally poised athlete who brought in impressive stats. She too was part of the Senior Fed Cup Team of 2019 and was crowned Women’s champion at the SSC Open.

Anjalika: Road to the Final

The defending champion started her run for the title as 4th seed and in the top half of the 16-member draw. Kurera had a breezy run in the tournament, claiming all her wins in straight sets.

Her first round was against Tuvini De Alwis who stood no chance against the champ. In the quarterfinal against Oneli Perera who was also in the Senior Fed Cup team, Kurera showed absolutely no mercy. In a blink, Kurera was through to the inevitable semifinal against top seeded Anika Seneviratne.

Recently crowned Clay Court Nationals champion, Seneviratne was no push-over and made sure to push Kurera to her limits. But in a stunning turnaround, Kurera managed to overcome Seneviratne in straight sets, 6/2, 6/4 to cruise on through to the final.

Rukshika: Road to the Final

With an impressive year of local appearances, Rukshika Wijesuriya was seeded 3rd in the Women’s Open Singles draw. Defeating Senuri Alexander and Preethika Chandramohan in the first two rounds, Wijesuriya soon found her spot in the semifinal against 2nd seed Janali Manaperi.

It was a heated clash with both players being power hitters, making every shot count. Wijesuriya managed to grab the first set early on with a score of 6/2. The second set was pushed into a tie-breaker, Manamperi fighting hard to push the match into a third set.

However, Wijesuriya played a more consistent 7-point game to finish off the match 7-1 in the decider. Final scores read 6/2, 7/6(1), sending Wijesuriya direct to the final of the Women’s open.

After a rain riddled first attempt, the big final was postponed by a day. Both players well rested, came out on to the center court to vie for the ultimate Championship.

After a brilliant display of tennis for the spectators gathered, the girls called it game, set and match in favour of defending champion, Anjalika Kurera with the final score reading 6/2, 6/2.

With the Women’s final drawing to a close, Sharmal Dissanayake and Dineshkanthan Thangarajah await their turn to claw at the Men’s title. The Men’s Open Singles final is scheduled to be played later this evening, 17th July at 2:30pm at the SLTA playing section courts.