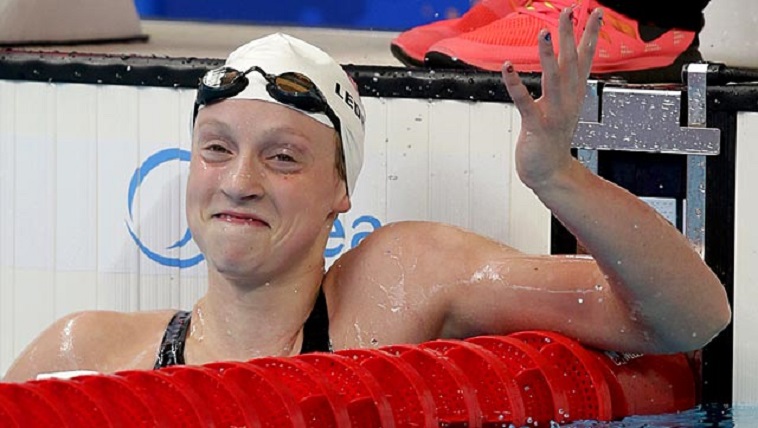 The women are getting it done at the world swimming championships.Sarah Sjostrom of Sweden lowered her own world record in the 100-meter butterfly to win gold Monday night, and then Katinka Hosszu of Hungary erased a world mark from the high-tech suit era to claim the 200 individual medley.

Earlier on Monday, American teenager Katie Ledecky bettered her own world record in the 1,500 freestyle preliminaries.

Four world records set in the first two days of pool swimming — and all by women.

Sjostrom first broke the mark set by American Dana Vollmer at the 2012 London Olympics in the semifinals on Sunday. In the final, the Swede led at the turn and won by a body length, touching in 55.64 seconds.

She dipped a hundredth of a second lower than her mark a day earlier while finishing 1.41 seconds ahead of Jeanette Ottesen of Denmark.

“My plan was to break the world record in the semifinals because there is always more pressure in the final,” Sjostrom said. “So I’m very happy that I could show myself that I could swim even with all this pressure.”

That bettered the old mark of 2:06.15 set by American Ariana Kukors at the 2009 worlds in Rome during a time when the sport was rocked by swimmers setting a slew of world records in rubber suits that were eventually banned.

Hosszu covered her mouth with her left hand and cried as she stared at the clock. Her husband and coach, Shane Tusup, wiped tears from his eyes using the neck of his black T-shirt bearing Hosszu’s nickname “Iron Lady.”

After the medal ceremony, Tusup joined Hosszu on the deck and he kissed her in front of photographers. She offered him her gold medal and he playfully took a bite out of it.

The Hungarian swimmer, who trains in the United States and met Tusup when they were swimmers at the University of Southern California, is known for keeping a grueling schedule of events at meets.

Earlier Monday, Hosszu was the top qualifier in the 100 backstroke preliminaries, but she scratched the semifinals to focus on the 200 IM.

Adam Peaty gave Britain its first gold medal in the temporary pool at Kazan Arena with a comeback victory in the 100 breaststroke.

But Peaty overtook van der Burgh in the closing meter, getting his hand on the wall in 58.52 for the gold. Van der Burgh was second in 58.59. Peaty’s teammate, Ross Murdoch, took third in 59.09.

“I turned and I saw his foot and I was like, ‘Right, I’ve got some catching up to do now'” Peaty said. “About 25 meters out he was still in front so I was a bit skeptical. But I remembered what I trained for is moments like this and I came out on top thankfully.”

Van der Burgh’s strategy was to go out fast and try to make Peaty catch him.

“It was hard. A pile of bricks came down on me in the last five meters,” Van der Burgh said. “We knew it was going to be a close race. Credit to him, he finished strong, and that’s the way he won the race.”

Peaty broke van der Burgh’s 2012 world mark earlier this year to become the first man in history under 58 seconds in the event.

“There’s only one more tick box and hopefully I’m ready for that next year,” said Peaty, who is aiming for his first Olympics next summer in Rio de Janeiro.

Nicholas Santos of Brazil finished second in 23.09. Laszlo Cseh of Hungary and Konrad Czerniak of Poland tied for bronze in 23.15.

Lochte was the leading qualifier for the 200 freestyle final on Tuesday night that features a loaded field including Sun Yang of China, Chad le Clos of South Africa, world record holder Paul Biedermann of Germany, James Guy of Britain and Cam McEvoy of Australia.

Russia’s Yuliya Efimova, whose doping ban ended earlier this year, led qualifying for the 100 breaststroke final on Tuesday night. She will duel world record holder Ruta Meilutyte of Lithuania, who was second-fastest in the semifinals.

Mitchell Larkin of Australia topped the semifinals of the 100 backstroke, dipping briefly under world-record pace on the first lap. Also advancing to Tuesday night’s final were Camille Lacourt of France and Olympic champion Matt Grevers of the United States.

In the women’s 100 backstroke semifinals, Emily Seebohm of Australia qualified fastest after being under world-record pace on the opening lap. Also advancing to the final on Tuesday night was Missy Franklin of the United States and teammate Kathleen Baker, who moved into the semis after Hosszu withdrew.