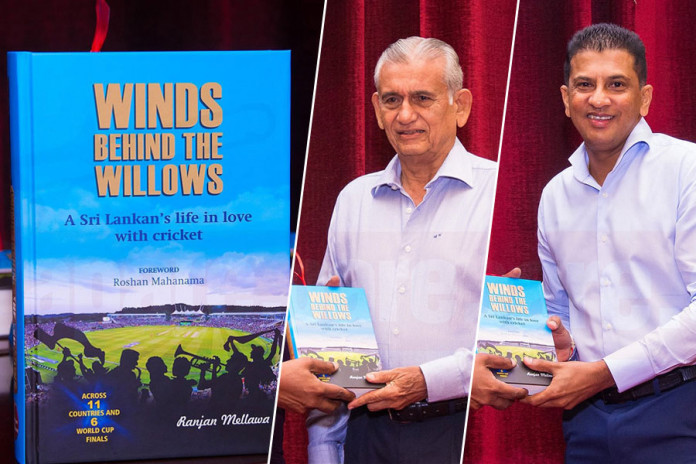 A fascinating cricket book written by a fan of his extraordinary journey across exotic lands in eleven countries to watch six World Cup finals; Ranjan Mellawa’s ‘Winds Behind the Willows’ was launched last Friday at the BMICH.

A book written by a fan for the fans, Mellawa has shared the rich life-lessons learnt and skills acquired, from the game’s many alluring features, emphasizing that cricket is a greater story than told by any scorecard.

He presented the first copy of the book to his beloved wife, who he describes as the ‘Cricket Widow’ in the book. During the charm launch, Mellawa gave away few more copies to friends and family. Former Ceylon captain Michael Tissera and 1996 World Cup winning team member, Roshan Mahanama and renowned commentator Roshan Abeysinghe also received copies of the book.

Photo Album: The Launch of Winds Behind The Willows

In his Foreword, former Sri Lanka player and ICC Match Referee, Roshan Mahanama describes the book as “a reader’s delight, which will have pride of place in my cricket library and says that he “wouldn’t be surprised if it does become a bestseller.”

“Ranjan Mellawa is not just a cricket fan, he is a cricket fanatic, or else he could not describe matches watched by him as he has done. Winds Behind the Willows is a work of love, most interesting and highly recommended reading for the cricket enthusiast.” Michael Tissera said, sharing his views on the author and the book.

“A fantastic book from a genuine Sri Lankan cricket lover. Ranjan’s passion for the game rings out loud and clear as he provides insight into how Sri Lanka’s cricket has evolved in the past few decades.” Mahela Jayawardena said.

This unique book is offered with a novelty gift – a bookmark embedded with genuine grass trimmings from the hallowed turf at the Lord’s Cricket Ground, the ‘Home of Cricket’.

“This is the remarkable odyssey of a genuine cricket fan who has presented the reader with a ringside picture of Sri Lankan cricket in the context of the evolution of the international game.”  Muttiah Muralidaran said, endorsing the book.

“Winds Behind the Willows provides a genuine, independent, real-life view into the world of Sri Lankan cricket. It’s a fascinating and thought-provoking book that has clearly been written with a lot of love for the game.” Kumar Sangakkara stated on the book.

The 464-page book is priced at Rs. 4000 and is available for purchase at Amazon.Com, YPD Books, Wow.lk, Barefoot, The Cricket Shop, Sarasavi Book Shop, Odel and Lake House Book Shop.