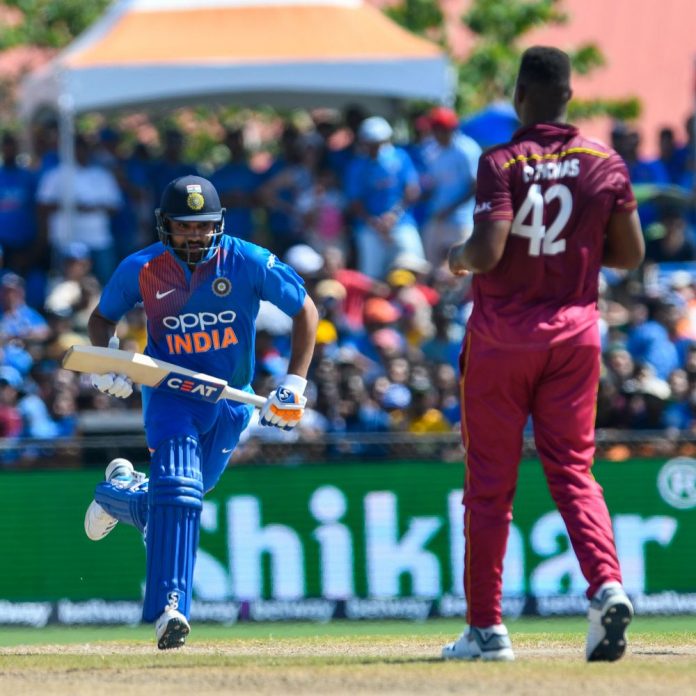 Rohit Sharma’s 67 and Krunal Pandya’s all-round effort took India to a 2-0 lead in the series with only a game left to play.

After winning the toss for the second day in a row, Virat Kohli decided his team would bat first this time around. Rohit and Shikhar Dhawan got them off to quick start, taking the visitors to 52/0 at the end of the Powerplay. They were helped along by some poor bowling by the Windies, as opening quicks Oshane Thomas and Sheldon Cottrell were both slightly overeager to not give Rohit any width and in doing so gave away multiple wides.

Keemo Paul came back well after a poor first over to pick up the first Indian wicket as Dhawan was bowled attempting to heave a straight ball delivered from around the wicket and not managing to get any bat on it.

India continued on their merry way though as new batsman Kohli provided support for Rohit. India had reached 115/1 before Thomas returned and accounted for first Rohit and then Rishabh Pant. Cottrell then backed up Thomas with a wicket of his own, uprooting Kohli’s middle stump with a full delivery.

The late comeback from the Windies was quashed in the final over of India’s innings as Keemo Paul was hit for three sixes by Krunal and Ravindra Jadeja, the over going for 20 all told to surge India up to 167/5.

The West Indian chase got off to a terrible start, as Evin Lewis was caught and bowled by Bhuvneshwar in just the second over, and Narine was bowled in the next over to leave his team 8/2. That brought Rovman Powell to the crease, and he was immediately looking to be positive as he drilled his first ball straight down the ground for four. While Nicolas Pooran struggled to score at the other end, Powell scored freely, seizing on anything over-pitched by the Indian seamers to drive over the top, including a beautiful hit over long off for six.

India managed to keep a lid on things through some crafty bowling, and eventually they saw the back of first Pooran, well caught at long on by Manish Pandey, and then Powell, trapped leg-before, within a single over from Krunal.

Soon after, the players were shepherded off the field due to the impending threat of a thunderstorm, and after failing to get back on, India claimed victory by 22 runs on DLS and secured the series, going 2-0 up with a game left to play.