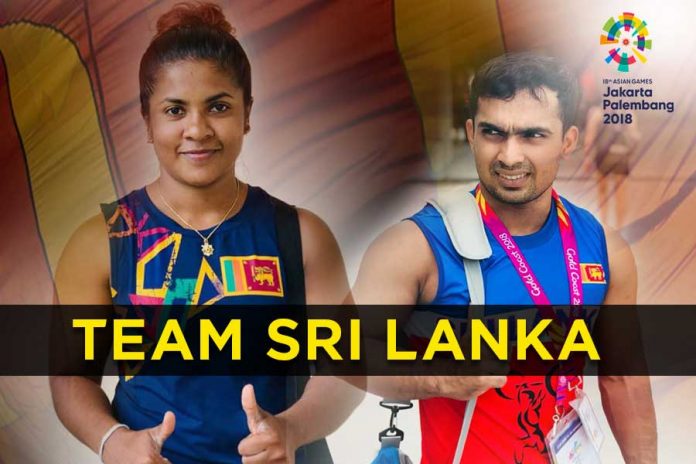 Sri Lanka will be sending a team of 4 weightlifters which will comprise of 2 male and 2 female athletes to the 18th Asian Games to be held in Jakarta.

Sri Lankan weightlifters were standout performers at the Gold Coast Commonwealth Games where they won 3 medals which included a silver and two bronzes, contributing to the six medals won overall at the Games.

Commonwealth Silver medalist Indika Dissanayake (69 Kg), Bronze medalist Hansani Gomes (48Kg), Chamari Warnakulasuriya (53Kg) and Thiwanka Palangasuriya (62Kg) who were both placed fourth at the Games will make up the team for the Asian Games. Asia will be a tougher challenge for the lifters with the world weightlifting power houses in the likes of Japan & Korea competing in the games alongside the middle eastern giants Iran and Iraq.

The Sri Lankan lifters have shown tremendous improvement since their historic outing in Australia and their improvement was showcased at the National sports festival weightlifting championship which was held in Anuradhapura. Hansani Gomes who was adjudged the best female lifter at the competition improved in the snatch and clean and jerk lifting a total weight of 158Kg, creating three national records. Similarly, Thiwanka Palangasinghe was named the best male lifter at the event, creating three new national records, lifting a total of 277Kg.

Sri Lanka’s #1 sports is dedicated to bringing you updates on the progress of the Sri Lankan track and field athletes. Visit the Asian Games hub on ThePapare.com –  https://www.thepapare.com/asiangames to receive exclusive and in-depth content on Sri Lankan contingent to the Asian Games 2018.