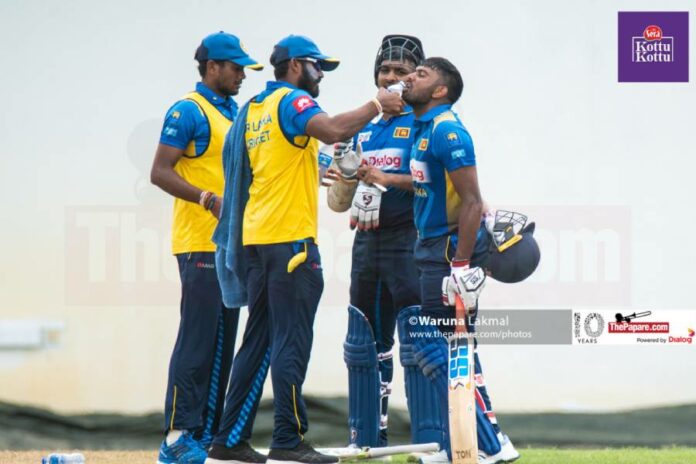 You have got to admire the fighting spirit of Bhanuka Rajapaksa whose international cricket looks over after he submitted a letter to SLC indicating that he would like to move on.

When Mickey Arthur threw down the gauntlet calling him a ‘sloppy cricketer’ due to his inability to meet minimum fitness standards, Bhanuka fought back admirably having hired a personal trainer and finishing the two kilometer run in stipulated time (eight minutes and 35 seconds) and bringing the skin fold levels to the 80s. He did have an impressive run in the T20 World Cup as well where Sri Lanka performed beyond expectations.

Now the selectors have raised the bar again, reducing the run trail to eight minutes and ten seconds while the skin folds need to be at 70s, quite demanding indeed. You would have expected Bhanuka to hang in there, take it on the chin, face the music and then make up his mind.

The growing trend among players who have mastered T20 cricket is to prematurely quit international cricket. When you are centrally contracted, you always need to seek No Objection Certificates from the board to play franchise cricket. The board sometimes priorities domestic cricket too and there are occasions that you miss out on one or two league tournaments. It has happened to Bhanuka quite a few times in the last 24 months.

So, it’s a sensible decision in a way that you don’t remain contractually bound to SLC. Anyway, the central contracts these days offer peanuts. Bhanuka would earn that money by playing two league tournaments. And then obviously he doesn’t have to kill himself trying to meet minimum fitness standards.

But Bhanuka is the kind of guy who has gone onto prove his critics wrong. He’s not that arrogant sort who takes on the authorities, but a down to earth and humble kind of guy who when convinced of something, focuses on it. He’s that sort of player who when challenged can bring on his ‘A’ game. You saw a new dimension to his cricket when he skippered the Galle Gladiators LPL side admirably more recently. So when everything is falling in line, for Bhanuka to give up now leaves a bad taste in many a fans’ mouth.

If Bhanuka needs inspiration, he can look up to many guys. When Tilan Samaraweera was asked to take up the Test captaincy ahead of the Rose Bowl Test in 2011, he refused it on principal. His detractors were waiting for an opportunity to punish him for this disobedience. Two Tests later, he was dropped for the third Test against Australia, that too at his home ground – SSC where his average is Bradmansque (77).

Tilan was overlooked for the tour of UAE that followed where Sri Lanka played three Tests against Pakistan. They did call him up for the tour of South Africa over the festive season. Now, the hard and bouncy tracks of South Africa have finished off the careers of many batsmen. Succeeding in South African conditions is a tough job. Basically, under the pretext of recalling him, there are those who wanted to finish Tilan’s career. He rose to the challenge admirably.

In the first Test at Centurion where Sri Lanka lost by an innings with two days to spare, Tilan was the team’s best batsman with scores of 36 and 32. In the next Test, the famous Boxing Day game in Durban which Sri Lanka won, he made a match-winning century becoming only the second Sri Lankan to score a hundred in South Africa. In the next Test in Cape Town, he smashed another hundred and to date he is the only Sri Lankan to have scored two hundreds in South Africa. Such was his influence that everyone wanted him to stay over for the ODI leg that followed.

Then there is the incomparable Aravinda de Silva. The nation lost two years of his prime as the aftermath of the 1999 World Cup saw many left out. In 2002, Michael Tissera as Chairman of Selectors felt the team needed some experience in the lead up to the 2003 World Cup and offered Aravinda an opportunity, but firmly told him that he had to lose weight. Aravinda took up the challenge, getting fitter and leaner. There was no question about his skill but his fitness levels were so poor. He bounced back and was easily the nation’s best batsman over the next nine months. He retired from Test cricket with a double hundred in his last innings but reserved his best for the World Cup the next year where he put world’s fastest bowler Brett Lee to the sword with those flicked sixes at Centurion.

Life keeps throwing you challenges and you will be judged by how well you face them. Bhanuka can earn a better living by being a freelance cricketer but international cricket is the real challenge. Now that Bhanuka has thought otherwise, here’s another challenge for him. He can do a Christopher Henry Gayle. Let his performances in franchise cricket force the selectors to recall him for the World Cup. To hell with the skin folds.