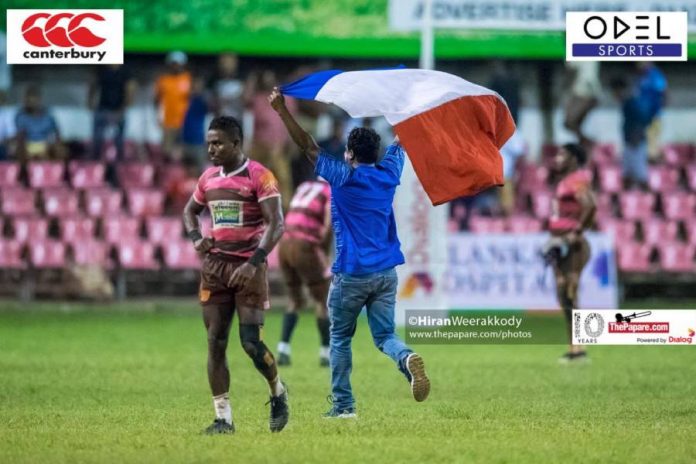 The Dialog Rugby League kicked-off last November with mixed perceptions. Its always good banter building up to the tournament with the big league clubs making key signings of players with the continuous expectation of winning the silverware.

Despite the teams making changes and aspiring hopeful to clinch the title, there is always just one constant in the club rugby arena in the country; Kandy Sports Club. From one of the toughest seasons faced by them in 2018/19 where the club encountered some stiff resistance, the 2019/20 passage has the hill-capital collective on the brink of having one of their best seasons in the last 5 years.

We’ve seen the end of seven exciting weeks in the Dialog Rugby League with a few twists and turns on the way. There has been a significant development in a select set of clubs while the rest has been disappointing.

After 7 weeks of action, Kandy sits comfortably on top of the points table with a staggering lead.

The numbers speak for Kandy Sports Club who have with them 40 points under their name which is a two-match cushion going ahead to the second round. Kandy has with them the most tries scored in the league so far in addition to being the only side to score 200+ points in seven games.

But what sets Kandy apart from the rest, is their all-round performance. The ‘Points Difference’ explicitly shows why they are the #1 team with the side having a 130-point surplus.

At second, Police have a surplus of only 30.

The emergence of the Cops

After finishing 5th in the table last year, Police have come a long way to finish 2nd at the end of the 1st round. By far one of the best combinations in the Dialog Rugby League, the Cops boast of an explosive backline with the likes of Iroshan Silva, Sachith Silva and Emosi Vunivosa.

Their wins have come against Havelock SC, CR & FC, Navy SC, CH & FC & Air Force. The game against Army was drawn while Kandy was the only team to put one over the Police Park lads.

The challenge for Police in the second round will be to keep up to the pace that they’ve been playing in the 1st round. Their plans might hit a detour since Police are lacking their key players owing to injury.

For Havelock SC, the path to success hasn’t been an easy one. With a majority of their key players exiting the club, coach Sanath Martis hasn’t had the best options to work with but the progress that the club has made is exemplary.

Losing only to Police and Kandy, Havelocks has done what they do best to get through their opposition. Their forwards, despite being very new to the club rugby arena have excelled to take the club’s cause onward.

The second round will be a tester for the Pink army as they intend to finish in the top 2.

Every year, in the run-up to the Dialog Rugby League, there is a hype around CR & FC. Big names signed up, star schoolboys recruited and expectations sky-high.

But disappointingly, the Red Shirts fail to live up to the hype and end up not making the top 2. This year was nothing different as CR & FC finish 4th in the points table after 7 matches.

CR & FC did not seem to be a composed outfit, even in their wins and they were exposed when it came to games against Kandy and Havelock SC.

However, everything is not lost for CR & FC with only two losses if captain Omalka Gunarathne and his team get their act together in the coming weeks.

The sorry tale at the bottom

The Dialog Rugby League’s point’s table is a good indicator to the level of rugby in the country.  At the top of the table, the top 4 clubs have been playing entertaining rugby. However, this has not been the case for the bottom tier.

From a promising campaign last season, the road has been downhill for CH & FC. After winning only one game that was against Navy SC, CH & FC has faltered. They finish 7th in the table and require an immediate facelift.