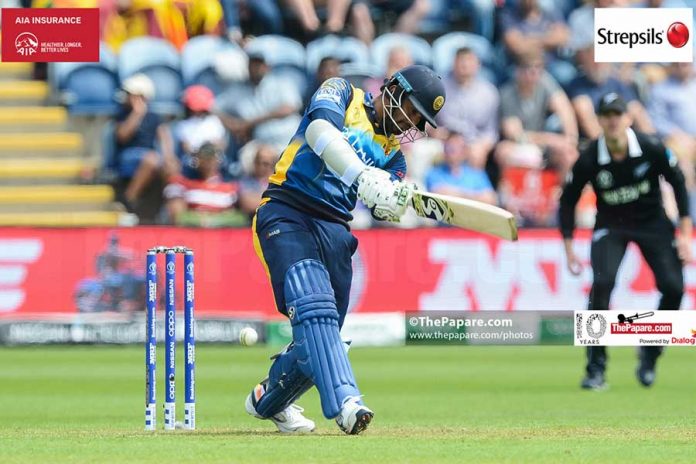 Dimuth Karunaratne urged Sri Lanka’s batsmen to follow his lead and urged patience as his side aim to recover from a heavy opening loss to New Zealand.

Sri Lanka succumbed to 136 all out and then a ten-wicket defeat in Cardiff, with their skipper’s gutsy half-century the standout contribution in their ICC Men’s Cricket World Cup contest.

The 31-year-old has made a seamless return to one-day cricket after four years on the sidelines, scoring fifties in tune-up contests against Scotland and South Africa.

But with the 52 stand he compiled with Thisara Perera the only characterful collaboration, Karunaratne implored his players to show more caution at the wicket in the coming games.

“You need to have a target. It wasn’t a 300 wicket, so you need another game plan,” said Karunaratne, who carried his bat for 52.

“You can’t go in and hit every ball, you have to stay calm sometimes and give yourself a chance. Once you get set, you can score.

“New Zealand bowled really well, we have to give them credit but if we kept a few wickets in hand in the middle, only then would we have had a chance.

“We needed a partnership in the middle. Once we lost the early wicket, we batted well, but we kept losing wickets.

“That’s the main reason we can’t score big runs in these conditions.”

Sri Lanka, ninth in the ICC rankings, battled manfully in the field in defence of their total but couldn’t separate Black Caps openers Martin Guptill and Colin Munro, unbeaten on 73 and 58.

Three wickets each for Matt Henry and Lockie Ferguson had done the earlier damage, with all of New Zealand’s featured bowlers taking a wicket in the match.

With games against Afghanistan, Pakistan and Bangladesh up next, Karunaratne’s side have opportunities to get back to winning ways.

A sizeable Sri Lankan contingent packed out the Cardiff Wales Stadium and the captain’s aim is to give them plenty to cheer in their remaining eight World Cup fixtures.

“We have eight games to go and plenty of time to turn it round,” he said.

“We need to keep our chin up. We know what we need to do in terms of building partnerships, and we look forward to doing it.

“The fans came a long way to Cardiff, they spent their time and money to see a good match.

“The fans all want to win with us and share the same ambition. Losing doesn’t matter but we need to give a good fight for them. That’s the main thing.

“We are all motivated to put on a show for them.”