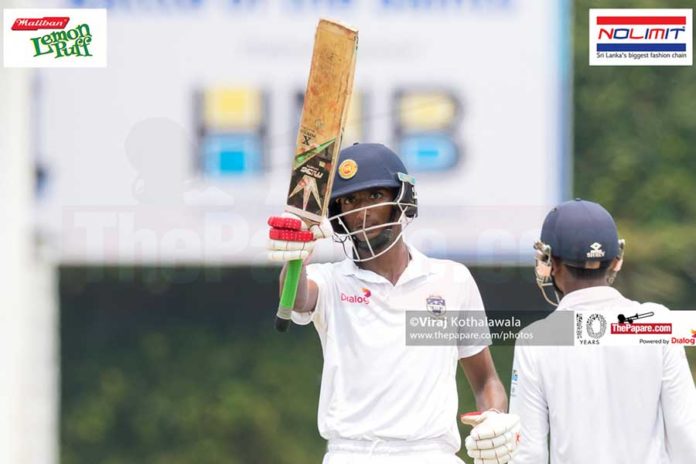 Barely a year after leaving school, young Santhush Gunathilaka is potentially set for one of the biggest challenges in cricket – a Test debut on Boxing Day at Centurion facing Kagiso Rabada and Anrich Nortje.

The coaching staff of the national cricket team and the team management are really excited with what Santhush can offer, they see a big future for the 21-year-old moving forward.

According to Mickey Arthur, Sri Lanka’s Head Coach, Santhush is the kind of guy that Sri Lanka want to rely on for the all-rounder’s position especially when they travel overseas.

Santhush lives in Thimbirigasyaya and attended St. Peter’s. He crossed over the Havelock Road to join Colts CC after school. When Colts won the Under-23 Championship last year, Santhush played a pivotal role with both bat and ball. He was only 19. Impressive performances at the Under-23 level gave him the opportunity to play First Class cricket this year and that changed everything for young Santhush.

That excellent talent spotter Ashantha De Mel, who has completed his term as Chairman of Selectors, was the one to push for Santhush. Ashantha knew that Santhush was producing big scores at the top of the order usually batting at number three. But what he did not know was that he could bowl decent seam. This he witnessed while watching a three-day game at SSC and immediately alerted Mickey Arthur.

Now, Arthur is someone who has worked with four international teams and it doesn’t take him much time to realize that he is watching a special talent. As a result, Santhush’s entry into Sri Lankan colours has been expedited after barely a handful of First-Class games.

What’s so special about Santhush? Well, he is an aggressive top order batsman and possesses a decent technique. His bowling has not been made use of much but at six foot two, Arthur feels that Santhush could get a lot of bounce and make life difficult for batters – particularly in a place like South Africa.

His bowling is certainly not the finished article yet and that’s why a residential camp with someone like David Saker will help him develop his game.

At the moment he won’t bat at three, like he does for Colts, but they are looking at him to bat at seven and then contribute ten to 15 overs a day. That would help the selectors balance the side. One may ask that isn’t that what Dasun Shanaka is supposed to do. But Santhush is a far more accomplished batsman than Dasun and has got the temperament for Test match cricket.

A player who can bat in the top seven and then bowl seam is a luxury that most teams would love to have. South Africa had it with Jacques Kallis, Australia had it with Shane Watson and England have that with Ben Stokes. Since the heydays of Imran Khan and Kapil Dev, the Asian region hasn’t had that luxury of a genuine all-rounder and Santhush could go onto fill that gap. De Mel and Arthur see him as a junior Jacques Kallis and there aren’t many better brains in cricket than that.

Well, we know that the same excitement was there when Suresh Perera first came into the scene. Then we have got carried away with talents like Gayan Wijekoon and Kaushalya Weeraratne. While these players were good First-Class cricketers, they could not make an impact in international cricket. Angelo Mathews was perhaps the closest, but injuries dented his effectiveness. Santhush gives us reason to be excited like never before.

Along with Santhush, there is another young player who will be going to South Africa – Dilshan Madushanka – the 20-year-old left-arm quick.

Dilshan hails from the fishing village of Hungama in the Hambantota District. He was spotted by former great Chaminda Vaas three years ago when the national team was training at Suriyawewa. Dilshan had turned up as a net bowler. Soon he was fast-tracked into Sri Lanka Under-19 side that played this year’s ICC Youth World Cup in South Africa. The special thing about him is his ability to bowl above 140kmph and that he is a left-arm quick.

Dilshan is not expected to play the Tests in South Africa. He is in the extended squad of 22 players to help the team during training as net bowlers are not allowed due to health regulations. However, he is an exciting prospect moving forward.

Left-hander Minod Bhanuka is one of the brightest talents around having piled up runs season after season in domestic cricket for SSC. He is however not there to make up numbers and Niroshan Dickwella will be feeling the heat with Sri Lanka set to play four Tests back to back – two against South Africa and two against England at home.

There seems to be some disappointment that Lahiru Udara did not make it to South Africa as he too has been a prolific run scorer in domestic cricket. But it’s important to have a mixture of youth and experience, especially when you go to a place like South Africa and the picking of Lahiru Thirimanne can be justified.