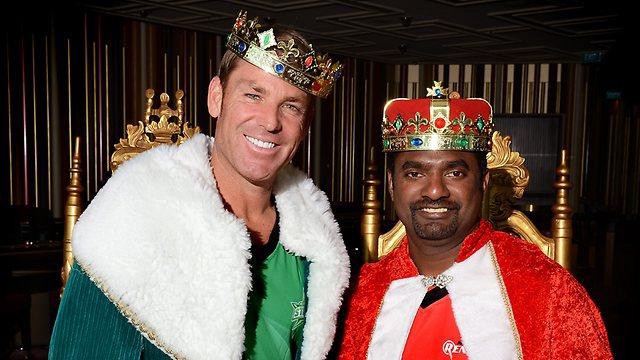 For those cricket tragics on Twitter, you may have heard of a user by the name of @robelinda2 who an amazing job of has done posting some classic video clips of cricket in all its glory. He has gained an incredible following with the likes of Shane Warne, Stephen Fleming, Jason Gillespie, Glen Maxwell and Tom Moody as just some of his followers.

However on 12th May he posted something different — a look at the Top 20 bowlers who took the most number of wickets away from home. 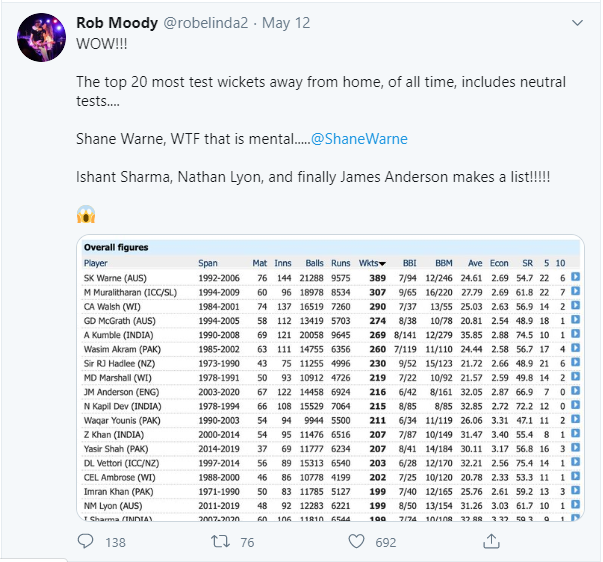 It clearly showed that a certain SK Warne (who was tagged on the Tweet) was dominant away from home, followed by a certain M Muralitharan. This is all it took for the Twittersphere to open up the age-old debate of the 2000s of who is really the G.O.A.T. It brought back splendid memories of the race to overtake Courtney Walsh to the highest wicket taker between these 2 giants — which was won by Warne, but eventually dominated by Murali.

What really caught my eye in this storm was a couple of other tweets that mentioned Murali got most of his wickets vs “weaker” nations — Bangladesh & Zimbabwe — and that if Warne had played as many games against those teams that Murali did, Warne would have ended up on well more than Murali’s mark of 800 wickets. Shane Warne, himself, tweeted “only 850?”. That is a fair point, and one that will be debated for years. However, I decided to take an analytical view on this great debate.

When looking at which of these 2 greats was the better bowler away from home, I first looked at the percentage of games played & wickets taken overall vs their away career to get an understanding of where and how often they played their cricket against all nations: 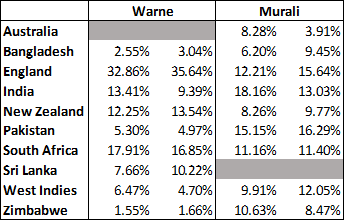 What it shows is — as you would expect due to the popularity of The Ashes— Warne played a majority of his games (32.86%) vs England & subsequently got 35.64% of his wickets against them too.

However, what these figures also show is that Murali played a lot more evenly around the world than Warne. How? If you look at the median % of games played, Warne has a median of 17.21% vs Murali’s median of 12.18%. This indicates Murali has a much smaller spread of difference between games played against all opposition.

Herath steps up as Murali’s successor

Looking at the same figures allow us to also address the point of “Murali took most of his wickets against Bangladesh & Zimbabwe”. To be exact, he took 17.92% of all his away wickets vs BAN and ZIM. A big reason for this was because Zimbabwe were actually surprisingly very good at combating Murali (at least in Zimbabwe) — especially when they had Andy Flower in their ranks. Murali had a S/R of 77.6 v ZIM, only Australia (S/R 131) & India (S/R 86.2) did better against Murali in terms of S/R.

Murali (Away) vs All Opposition

Warne (Away) vs All Opposition

Overall what this shows is, Warne certainly dominated the likes of England & South Africa where as Murali seem to equally bamboozle the whole lot.

The point that Warne may have ended up with more wickets had he played BAN & ZIM more is true to a point, however the same principle can be applied to Murali except had he played against say England as much as Warne did.

We can get an idea of who would have finished with more wickets if Warne played the same number of games vs BAN & ZIM as Murali and vice versa for Murali against England.

If you extrapolate the data for Warne vs Bangladesh & Zimbabwe to the approximately the same number of overs Murali bowled against those 2 nations, Warne ends up taking a total of 39 more wickets (26 vs BAN & 13 vs ZIM). This takes his total away tally to 401 wickets & his total Test wickets tally to 747 wickets.

For Murali when you repeat the same exercise, except replace the opposition with England — Murali ends up taking 92 more wickets. Taking his total away tally to 399 & total Test wickets tally to 892.

For those wondering how Murali still takes that many wickets, you simply need to look at his strike-rate. Murali was a lot more effective at taking wickets than Warne against most opposition. Warne was more effective than Murali only against India, New Zealand & Zimbabwe.

In conclusion, according to the numbers, Murali was the more effective bowler. Taking nothing away from Warne though, who is a legend in his own right. Both of these players defined spin bowling when cricket was surging to new heights. Every young kid either imitated Warne or Murali or both in their backyard growing up in the 90s and 2000s.

As I have previously mentioned, this is a debate that will rage on for years to come. However, for whichever side of the fence you sit on, at least you have the facts & figures to rely on.