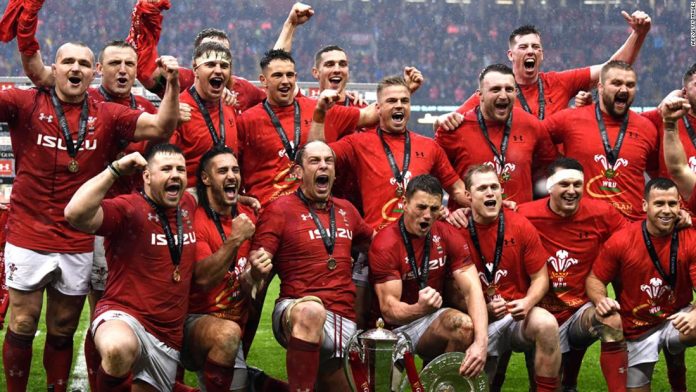 The stunning victory extended Wales’ winning streak to 14 matches, moving them to second in the World Rugby standings and handing Gatland’s team a massive psychological boost looking ahead to this year’s Rugby World Cup in Japan.

It was the third under Gatland in his 50th and final Wales game in European rugby’s showcase tournament following Grand Slams in 2008 and 2012, and a first Six Nations title since 2013.

The tone of what turned out to be an electrifying start was set from the off.

Gargantuan winger George North followed up on Anscombe’s kick-off, catching Jacob Stockdale in possession and driving him into touch.

The crowd, barely in their seats after stirring anthems, were quickly galvanised as Ken Owens peeled off the attacking line-out, Hadleigh Parkes gathering Anscombe’s dink over the top to touch down within two breath-taking minutes, the fly-half converting.

Kiwi-born Parkes, who made his Super Rugby debut alongside Anscombe for the Auckland Blues before relocating to Wales, was then on hand to produce a superb try-saving tackle on Stockdale in what turned out to be a disappointing Ireland’s best chance of the game.

World Rugby player of the year Johnny Sexton caught the Welsh defence flat-footed with a clever raking cross-kick, Stockdale expertly gathering and shrugging off Gareth Davies as he steamed down the line before Parkes hauled him down with the line beckoning.

Influential playmaker Dan Biggar made an earlier-than-expected entry after North went off with an injured left wrist, Anscombe slotting in at full-back with Liam Williams moving to the wing.

When Sexton was pinged for a ruck infringement in the 18th minute, Anscombe made no mistake with the penalty to stretch Wales’ lead.

Sexton spurned a shot at goal himself after a rare spell of Irish pressure, but Adam Beard launched himself into the attacking Irish maul off the line-out, Justin Tipuric isolating Irish skipper Rory Best and forcing a knock-on.

Anscombe increased the home side’s lead to 16 points with two further penalties just before half-time, ironically the same lead France held over Wales after the first 40 minutes in the opening match of this Six Nations campaign.

Alun Wyn Jones, equalling Gethin Jenkins as the most capped Welshman of all-time with 134 caps (including nine matches for the British and Irish Lions), was to the fore as the go-to line-out jumper and around the park with ball in hand.

And it was he who held up James Ryan early in the second period to force an attacking scrum in another blow to Ireland as Schmidt’s men tried to find a foothold.

Cian Healy then gave away a soft penalty with an off-the-ball hit on opposite number Tomas Francis, Anscombe hitting an elementary three points to take Wales out to 19-0.

As Sexton misfired from fly-half in a game he will want to forget, so the mistakes kept coming for his team.

Winger Keith Earls badly misjudged a defensive back-tracking touchdown to again hand Wales the advantage and when replacement Andrew Porter strayed offside at a ruck, again in front of the posts, Anscombe gleefully stepped up with kicking tee for a sixth successful pot at the sticks.

There was a late consolation try for Ireland from Jordan Larmour, converted by Jack Carty, as the team avoided a first whitewash since 1990.