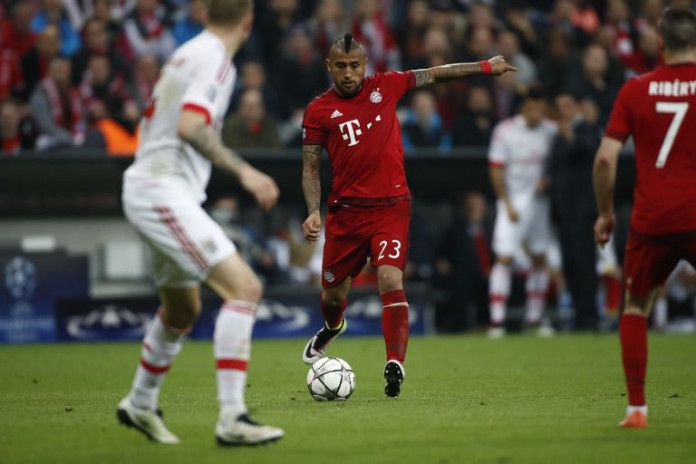 Bayern‘s Arturo Vidal netted just 109 seconds into the first leg at Munich‘s Allianz Arena to give the Germans the slenderest of leads for the second leg on Wednesday April 13.

But Vitoria has warned star-studded Bayern they will have to battle to get a result at Benfica’s Estadio da Luz if they want to reach a fifth straight Champions League semi-final.

“My players implemented our strategy very well and I am proud because we put in a good performance here,” said Benfica’s Vitoria.

“It’s not easy to get a result and most teams have great difficulties here.

“So I am very, very happy with the way we played.

“Everything is still open and we will fight for every centimetre in Lisbon.”

Vitoria’s Benfica can take plenty of heart before the second leg, but the Portuguese league leaders will be without top-scorer Jonas.

The 32-year-old picked up a second-half booking, his third of the tournament, which means he will be suspended for the return.

Bayern boss Pep Guardiola was pleased to take even a slender lead to Lisbon after a his team failed to take their few chances on a frustrating night.

“I am very happy, because I know the level of the opponent,” said the Spaniard, who is in his third and final season in Munich before coaching Manchester City next season.

“In the quarter-finals of the Champions League, it is always the second leg which decides things.

“We’ll fly to Lisbon to win the game.”

Guardiola singled out Chile international Vidal, 28, for praise in a good all-round display in the midfield holding role.

“Arturo is very, very important for us,” said Guardiola.

“He has done really well in the last few months with his big personality and experience.

“The goal was important for him and us.”

Benfica goalkeeper Ederson, 22, kept his side in the tie with a string of decent saves to deny Bayern‘s star-studded attack spearheaded by Robert Lewandowski and Thomas Mueller.

“We didn’t have so many chances to score and we didn’t use the few we had,” said Germany forward Mueller.

“We’d have liked to have scored a second goal, but we’re taking a good result into the return leg.

“We need to have more spirit and drive.”

But as Bayern goalkeeper Manuel Neuer pointed out, the key thing for Guardiola’s side was not to concede a goal.

“Benfica’s back four stood up well and we missed out on that second goal,” said Neuer.

“But despite all that, we can be very happy with the result, because we kept them to nil.

“That was the most important thing.”

Bayern had only themselves to blame for not doubling their tally in the dying stages.

Lewandowski got in behind the defence and drew Ederson, but his pass to an unmarked Philipp Lahm was too long, just a minute from the whistle.