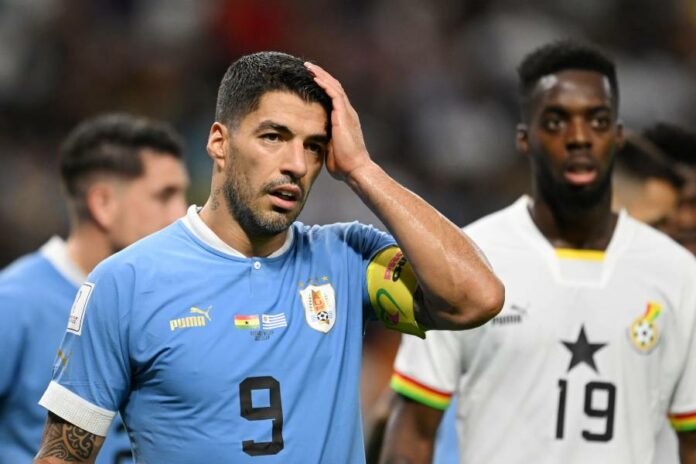 And with the meeting between Korea Republic and Portugal apparently destined for a draw, the Uruguayans’ first win in Qatar looked sufficient for a Round of 16 place. But Hwang Heechan struck for Korea in time added on to move the Asians above Uruguay by dint of goals scored.

Uruguay seized control of this game after Rochet atoned for a foul on Mohammed Kudus by springing to his left to keep out Ayew’s tame strike from 12 yards.

Mohammed Salisu brilliantly cleared off the line after Darwin Nunez dinked an attempt over Lawrence Ati-Zigi. But keeper Ati-Zigi was beaten soon after. He got a strong hand to Suarez’s initial attempt but the ball squirted through for De Arrascaeta to nod into an open goal. The forward scored his second with a volley drilled under Ati-Zigi following a tremendous pass out of a crowd scene from Suarez.

Ghana staged a rally of sorts after the break. Osman Bukari and Antoine Semenyo missed the target from good positions and Rochet got down quickly to repel Kudus’s 20-yard strike. For Uruguay, Facundo Pellistri was narrowly wide from inside the box and Ati-Zigi beat out a long ranger from Federico Valverde.

Those missed opportunities didn’t seem costly, until Hwang set up a frantic but ultimately futile pursuit of the third goal Uruguay needed to advance.

The temptation here is to write about the save from Rochet that prevented Andre Ayew from banishing the pain of Ghana’s penalty mishap against Uruguay 12 years ago.

It appeared written in the stars that Ayew would make amends for the miss from Asamoah Gyan that cost Ghana a place in the semi-finals in South Africa. But Rochet easily kept out a weak penalty, preventing the Africans from taking the lead and setting the stage for De Arrascaeta to strike twice and claim the points for Uruguay.

The South Americans were destined for the last 16. But then came news from Education City Stadium of Hwang’s stoppage-time goal for Korea Republic to beat Portugal. Now we had our key moment. No, it didn’t occur at Al Janoub Stadium but the impact of Hwang’s strike stunned the place.

Suarez, watching from the bench, instinctively dissolved into tears. And Ghana supporters, disappointed by their team’s exit, will have drawn some consolation from that. Suarez, remember, was the ‘goalkeeper’ without gloves who prevented a certain Ghana goal back in 2010, conceding the penalty skied by Gyan.

On this occasion, Suarez was powerless, there was nothing he could do about his team’s plight. All because of a goal that provided this game’s key moment, even if it was scored in another match entirely.

De Arrascaeta is the third Uruguayan player to score twice in the first half of a World Cup match after Peregrino Anselmo (against Yugoslavia in 1930) and Óscar Míguez (against Bolivia in 1950). On both those occasions, Uruguay went on to win the tournament.