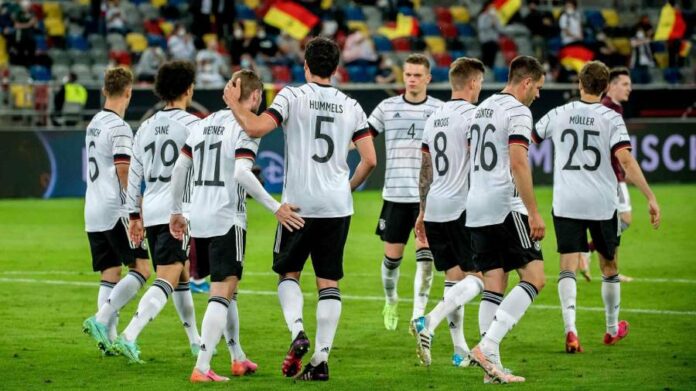 Germany will be hoping to give a grand farewell to their longtime coach Joachim Low in the upcoming Euro, winning the only international trophy that is missing from a much-decorated trophy cabinet.

Germany have won the Euro a record three times – the highest by any nation alongside Spain, while emerging runners-up another three times, and thus, can be appraised as the most successful team in the history of European Championships.

Their first title reign dates back to the Euro 1972 in which they emerged champions in their maiden appearance at the tournament and then they followed it up with a further two title winning campaigns in 1980 and 1996. Germany’s runner-up finishes at Euro were recorded in 1976, 1992 and 2008, the last of which was under their current coach Joachim Low.

Germany conquered the world in 2014, winning the FIFA World Cup after a brilliant and dominating display of football throughout the tournament, but has been on a downward spiral ever since. In the subsequent World Cup in 2018, they were astonishingly knocked out from the group stages despite being drawn in a group where they were the firm favourites to advance.

However, they progressed up to the semi-final stages in the last edition of Euro in 2016 before suffering a 0-2 defeat there against a dominant French side, which ended their journey.

Germany had an up to scratch qualification campaign, topping group C, winning 7 out of the 8 matches that were played while losing only 1. Their solitary loss was recorded against The Netherlands in which they fell on the wrong side of a 2-4 enthralling encounter of football. Germany’s notable victories in the Qualifiers came against Estonia and Northern Ireland, where the scores read 8-0 and 6-1, respectively.

However, just a few months back, they suffered a 0-6 embarrassing defeat against Spain in the UEFA Nations League, which was followed by a surprising 1-2 defeat against North Macedonia in the World Cup Qualifiers.

Joachim Low has been in the driving seat of Germany since 2006 and it was announced a few days back that he would be bidding adieu to the team after the conclusion of Euro this year. There was a time where he was considered to be the best coach in world football, and everyone went into raptures about his heroics, especially when he led the team to become champions at the 2014 FIFA World Cup and later, at the 2017 FIFA Confederations Cup as well.

It was not just the trophies he won but how Germany won those, through the authoritative brand of football that he made the Germans play that caught everyone’s eyes. His playing style is primarily based on deadly counterattacks and a stable defence at the back, while pressing high up the pitch to gain possession of the ball and catch the opposition defences off-guard.  The intensity at which Low made the Germans play in their peak was just something else and one does not simply have to go beyond their 7-1 thrashing of Brazil in their own backyard in the semi-finals of 2014 World Cup to witness their dominance.

Although Low is known to change his team formations at regular intervals, he mostly prefers a 3-4-2-1 system with only three men at the back, which it is expected that he will use in the upcoming tournament.

However, performances of Germany under him over the last 3-4 years have largely been underwhelming and inconsistent, with his team-selection, overall plans and strategies being subject to severe criticism by fans and pundits alike. Thus, Low has a point to prove and get his tactics on-point if he is to end his stint with Germany on a high, winning the upcoming Euro.

The squad that will be representing Germany at Euro 2020 is no doubt a world class squad that is more than capable of going all the way and winning the tournament. This gives Low a decent level of squad depth to rotate his players and make game changing substitutions.

They are also perhaps the squad with the best midfield in world football at the moment. A midfield comprising of Toni Kroos, Thomas Muller, Joshua Kimmich, Ilkay Gundogan, Leon Goretzka and Kai Havertz is as good, creative, and dominating as it gets and Low would certainly have a hard time figuring out his final midfield combination due to the enormous quality that all these players offer. Germany also have deadly and pacy wingers up their ranks in the form of Leroy Sane and Serge Gnabry who could run riot over any given opposition.

However, their striking options and the backline would be a major point of concern coming up against other strong opponents. While Timo Werner has been Low’s preferred striking option he is not in the best of his form, while Kevin Volland has not really proved anything thus far with the national team. Although the inclusion of Mats Hummels in the squad obviously strengthens their defence, it is doubtful as to whether Low could concoct a superior backline given the options available at hand.

Germany’s recent inconsistent and sometimes horrific performances in crucial matches is certainly a weakness that they should overcome if they are to gain something out of the upcoming Euro.

Key Players and Ones to Watch

Even though Germany do not rely on one single star player to procure them results, the midfield maestro Kroos will be the machine that keeps them running while maintaining the tempo of the game. His acute passing coupled with Kimmich’s creativity and crossing ability would fabricate ample opportunities for their frontline to score goals. The in-form man Muller’s positioning, finishing and experience would also be decisive for them throughout the tournament.

Gnabry’s monstrous runs through the wings and quality finishing would pose a constant threat to opposition defences, while Captain Manuel Neuer, who is among the best goalkeepers in the world would ensure that goals will not come easy for even the strongest of opposition frontlines.

21-year-old Havertz, who scored the solitary goal in the UEFA Champions League finals, which handed Chelsea the trophy and the 18-year-old teenage sensation Jamal Musiala, who had a stellar last season with Bayern Munich would be the German players to watch out for in the upcoming Euro.