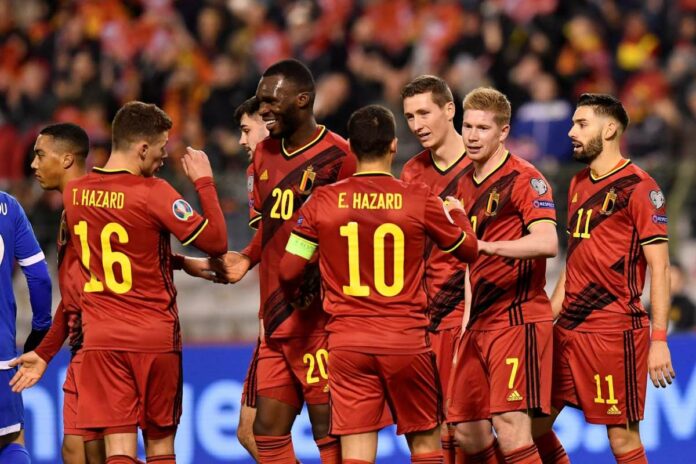 The world no.1 Belgium will be on the lookout to continue the excellent recent form to end their trophy drought and add the maiden international honour to the trophy cabinet in the Euro 2020.

Belgium’s best ever finish in the Euros dates way back to 1980, where they became the runners-up at UEFA Euro 1980 after suffering a 1-2 defeat against West Germany in a closely contested final.

They were also able to secure a third-place finish at the 1972 edition of the tournament held on their home soil, while their last outing at Euro 2016 met a disappointing end at the quarterfinal stage when they were surprisingly beaten by Wales 3-1.

Their head coach Marc Wilmots was sacked by the Royal Belgian Football Association following the underwhelming Euro 2016 campaign and shortly afterwards, was replaced by the Spaniard Roberto Martinez, who is now the mastermind behind Belgium’s impressive run of form during the past half-decade.

The Red Devils had an accomplished campaign at the FIFA World Cup 2018, which saw them achieving their highest feat ever at the grandest stage of all – a third place finish as they overcame England by 2-0 goals in the third-place play-off.

Belgium seized their qualification to Euro 2020 topping Group I with a perfect record winning all the 10 matches in the qualifiers and were the only team to do so other than Italy. They were in fact the most impressive team during the qualifiers as they showcased their offensive prowess and defensive stability by scoring the most goals (40) and conceding the joint-fewest (3) number of goals. Their notable performances in the qualification phase included 9-0 and 6-1 victories against San Marino and Cyprus, respectively.

Although the Red Devils are making their way into the tournament with a 9-game unbeaten run across all competitions, they were not able to replicate their dominance in the recently concluded international friendlies as Greece managed to hold them to a 1-1 draw, while they barely got past Croatia 1-0.

Belgium owes much of its success to Martinez for his tactical approach in transforming them to a footballing powerhouse in Europe. He had proved himself in his previous managerial stints at English Clubs of Swansea City, Wigan Athletic and Everton before taking over the ruins of Belgium in 2016 and has employed a possession-based style of play throughout his managerial career.

Martinez has been able to take the best out of the untapped potential of Belgium’s golden generation, while showing a great level of tactical and match awareness, where he has shifted from attack to defence and vice versa depending on how the game unfolds. His approach has brought them immense success winning 43 of the 56 matches he has managed so far, while losing only 4. The Red Devils have also been able to continuously maintain their place at the helm of FIFA world rankings for more than 2 years now.

It is expected that Martinez will utilize his revolutionary 3-4-3 three-men at the back formation in the upcoming Euro 2020, in combination with a 3-4-2-1 formation depending on the availability of players and the situation at hand.

The Red Devils step into the Euros with one of the strongest attacking units in world football today. There are not many teams that can compete with the likes of Romelu Lukaku, Eden Hazard, Dries Mertens and Kevin De Bruyne in terms of their attacking prowess. All these players with the notable exclusion of Hazard are coming off of excellent seasons with their respective clubs and will be eyeing to replicate the same performances in their national outfits.

However, the recent injury woes of Hazard coupled with his dip in form and the injury De Bruyne suffered during the finals of the UEFA Champions League pose doubts as to whether they would be fully fit to play their best game.

Although they have a reliable custodian in the form of Thibaut Courtois in between the posts, their defence could look a bit shaky and lacking in pace at times with both Jan Vertonghen and Toby Alderweireld, as experienced as they are, gradually approaching the twilight of their careers, while the centre-back Jason Denayer is yet to prove himself with the Red Devils.

The squad depth in comparison with other strong teams like France and Portugal would be another area of concern for Martinez as they lack elite options on the bench in case one of their star players get injured and for substitutions, which would be of crucial importance in turning ties around.

Nevertheless, they are expected to cruise through the groups stages although the other teams in group B – Denmark, Russia and Finland can be tricky at times, and go far in the tournament.

It is fair to say that De Bruyne has overtaken Hazard as the team’s star player and he is coming off of another superb season with Manchester City, winning the Premier League and the League Cup, while emerging runners-up at the UEFA Champions League. One of the best, if not the best midfielders at present, De Bruyne was also named as the PFA Players Player of the Year 2020-21.

He is expected to recover in time to represent the Red Devils at Euros and hence, would be the key man for Martinez in the tournament owing to his playmaking abilities, vision, passing and potential to score and conjure goals out of nothing.

Lukaku is in the pinnacle of his career and has been in sublime form for Inter Milan during the past season leading them to the Serie A title scoring 24 goals, while assisting another 11, which saw him being named the League’s Most Valuable Player. His work-rate, intelligence and prolific goalscoring ability would provide them with an extra edge over their opponents.

The Red Devils would also expect their Captain Hazard to find his form with him being an integral part of Martinez’s plans, while the Rennes teenager Jeremy Doku, who completed 110 dribbles during the past season, the most by any player in Europe’s top five leagues would be the player to watch out for in the upcoming Euros.