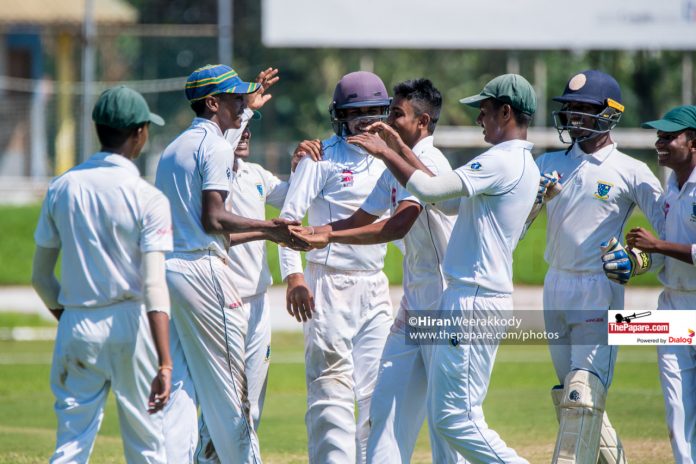 The first round of the Singer U19 Division I Cricket tournament 2019/20 ended with the conclusion of 6 tournament games today. The 127th Royal-Wesley encounter also ended in a tame draw.

De Mazenod College escaped the disgrace of not making it to the top 4 of the group, after St. Benedict’s College failed to accumulate enough points to overtake the Mazenodians in their game against group toppers St. Joseph’s. Despite De Mazenod’s poor show against Mahinda College in Galle, they managed to hang on to their 4th position. The Josephians’ first innings win over St. Benedict’s was also a help to De Mazenod. Royal College and D.S. Senanayake College are the other two teams to qualify for the knockouts from Group A.

After conceding 298 runs to their opponents, St. Benedict’s were bowled out for 239 as the Josephian spinners Shalinda Senevirathna and Miranga Wickramage starred for the Darley Road boys. Skipper Johanne De Silva then smashed a half-century in to end the game in style. However, his counterpart Shehan Fernando’s knock of 88 went in vain at the end.

De Mazenod were bundled out for a mere 123 in their reply to Mahinda’s 272 and were made to follow on. Saliya Jude then came to their rescue with an unbeaten 83 to avoid defeat and help them end the game without too much damage.

St. Anne’s College secured a thrilling 7-run first innings lead, followed by a scintillating batting effort in the second innings, helping them to inch ahead of Dharmasoka College in the table and finish among the top 4. In fact, they overtook Prince of Wales College, who were at 4th place, to finish 3rd in the group. Dharmasoka’s failure on the field today also marks the end of their journey in the tournament. St. Anthony’s College, Kandy and S. Thomas’ College, Mt. Lavinia are the other teams to make up the top 4 of Group B.

In a look at individual performances, it was seen that off-spinner Manaan Muzammil led their charge with the ball, claiming 5 wickets before Rishitha Perera, Kavindu Ranasinghe and Lasith Warnakulasuriya guided them to 318 in just 55.4 overs in the 2nd innings.

In another game of the group, group toppers St. Anthony’s College, Kandy consolidated their spot with a first innings win over St. Peter’s. Their spin attack led by Nimnaka Jayathilaka restricted the Peterites for 191 before picking up 5 more wickets in their follow on. The Antonians had amassed 385 on day 1.

St. Thomas’ College, Matara managed to end the group stage as the 3rd best team of the group, as their first innings win over St. Joseph Vaz College lifted them ahead of Richmond College. The Richmondites were beaten on first innings by St. Sebastian’s as they consolidated their 4th position. Trinity College ended as the group top, as well as the team with the highest points among all 4 groups.

St. Thomas’ bowled out the hosts, St. Joseph Vaz, for 147, sealing a first innings win while St. Sebastian’s chased down the 343 made by Richmond in a marathon batting effort. Nishitha Abilash, Bihanga Mendis, Induwara De Alwis and Sukitha Prasanna all scored half-centuries for them.

Royal College ended their 127th traditional affair against Wesley College on a high as they bundled out the hosts for 255, after a scoring 323 for the 1st innings with the help of a brilliant century from their star batsman Kamil Mishara. This historic fixture is Sri Lanka’s 2nd oldest inter-school cricket encounter.

Dharmaraja College also began their traditional encounter against Ananda College scoring 254 for the loss of 8 wickets on day 1.