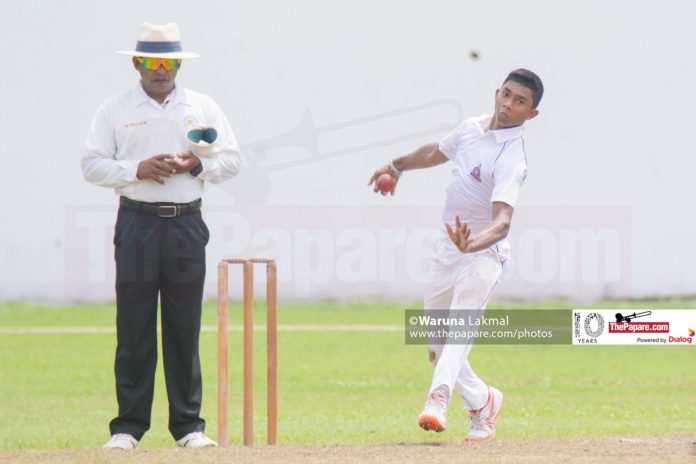 The Group C encounter between Nalanda College and St. Anthony’s College in the Singer Schools ‘Under 19 Division 1’ Two Day Cricket Tournament 2019/20 ended in a draw today at Nalanda College Grounds with the hosts claiming first innings points in the drawn encounter.

St. Anthony’s College began their reply with the bat today but could not execute their plans properly as they were bowled out for 127 runs in 39.3 overs. The left handed batsman Amitha Sandeepa was the chief contributor with the bat as he made 29 runs for the visitors.

Leg spinner Raveen de Silva who represents the Sri Lanka U19 team currently, showed his credentials with the ball taking 6 scalps for just 30 runs. The hosts began their second innings 53 runs ahead and posted 102 runs for 7 wickets before declaring the innings in the 37th over.

The right hander Mahima Weerakoon (30) and the skipper Avishka Perera (27) top scored with the bat for the hosts. The left arm leg spinner Kaveesha Dulanjana who starred with the ball in the first innings taking 5 wickets, took 3 more wickets for 28 runs while Pathum Vihanga picked up 2 scalps for 40 runs.

Chasing a modest target of 156 runs to win, the visitors suffered a huge batting collapse as they lost 6 wickets for just 41 runs in 31 overs. The leg spinner Raveen de Silva starred again with the ball taking 3 scalps for 13 runs. The off spinner Mahima Weerakoon gave him a good support at the other end picking up 3 wickets for 14 runs.