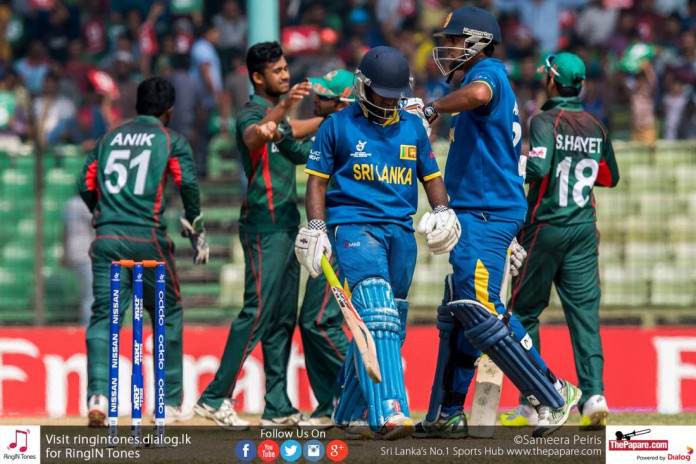 Bangladesh under 19s stunned Sri Lanka U19s by three wickets in a nail-biting third-place play-off match in the ICC U19 Cricket World Cup at Fatullah on Saturday.

The hosts’ were cruising when they needed only 68 from 90 balls but two crucial run-outs in the middle of their chase tensed the game and dragged it till the last over but Jaker Ali and Hasan Rana held their nerve to take their country to victory and finish the tournament on a high note.

Chasing 215 runs to win, Asitha Fernando’s excellent in-swinger removed Zakir Hasan for a golden duck but a 58-run stand for the second wicket between Joyraz Sheik and Jaker Ali set the chase in motion. Ali was stretched off the field in the 15th over due to a cramp and few overs later, Sheik was uprooted by the left-arm spin of Damitha Silva.

After being 59 for 2, experienced, Mehedy Hassan and Nazmul Hossain paved the way for a Bangladeshi win as they manipulated the Lankan bowling during their 88-run stand for the 4th wicket. Man-of-the Match Mehedy Hassan top-scored for the hosts’ with a well-calculated 66-ball 53 while Hossain made 40 in 57 deliveries.

Earlier, Charith Asalanka won the toss and elected to bat on a slow and flat surface. The Lankan openers, Salinda Ushan, playing his first game of the tournament and Kamindu Mendis gave the Islanders a sound start as they constructed a 60-run stand inside 12 overs before the former misread Mehedy Hassan’s off-spinner and was stumped for 34.

Mendis played down the wrong line and was struck LBW while in-form Avishka Fernando was caught down the leg side as the Bangladeshi skipper Hassan single-handedly rattled the Lankan top-order.

The Lankan leader Charith Asalanka and his deputy, Sammu Ashan added 39 for the 4th wicket before left-arm seamer Rana took the outside edge of the Lankan vice-captain. Wicket-keeper batsman Vishad Randika was stuck right in front of the stumps while attempting a sweep shot against the bowling of Saleh Ahmed.

The two Richmondites, Asalanka and Wanindu Hasaranga shared an invaluable 55-run stand for the 6th wicket  to guide the Lankans to a formidable score but the fast-seamers of Mohommad Saifudin pegged back the visitors as he took the wickets of Hasaranga and Jehan Daniel in consecutive balls.

Asalanka made his third half-century in the tournament as the Lankan innings revolved around his knock of 76 off 99 balls which included 6 fours and a six as they posted only 214.