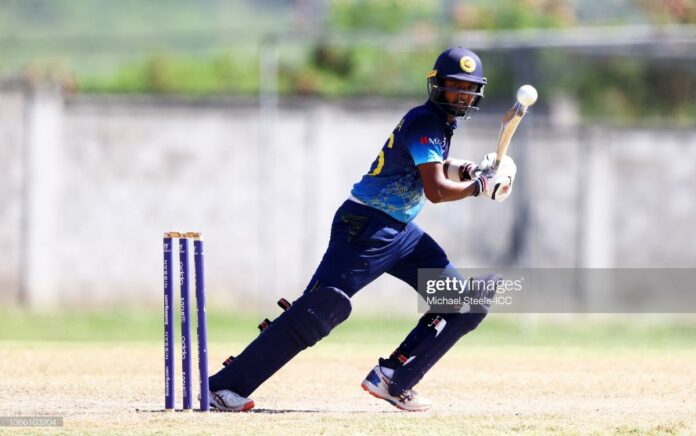 Having won the toss, Sri Lanka Skipper Dunith Wellalage chose to bowl first at Basseterre and came up with an unchanged playing XI against Windies. Sri Lanka got off to a good start with the ball, as spinners Traveen Mathew and Dunith Wellalage came to the act very early in the innings, dismissing both the West Indies opening batters inside the first 8 overs.

However, West Indies batters Teddy Bishop and Kevin Wickham did the repair work, building a 68-run partnership for the 3rd wicket before the Skipper Wellalage struck again to take Bishop’s scalp in the 27th over.

Wickham built another crucial half-century stand with Jordan Johnson, as Windies posted 250 for 9 in the allotted 50 overs. Wellalage, who has been in great touch with the ball throughout the tournament, picked up another 3-wicket haul, while speedster Matheesha Pathirana also chipped in with 3 scalps for Sri Lanka.

Chasing 251 runs to win, Sri Lanka faced a huge blow as their opening batter Chamindu Wickramasinghe lost his wicket in the very first over of the innings. However, the other opening batter Sadisha Rajapaksa rescued the innings building vital partnerships of 52, 40 and 78 with Shevon Daniel, Sakuna Liyanage and Anjala Bandara respectively to guide the islanders over the line.

Rajapaksa top scored with 76 runs off 115 balls with 5 fours to his name while Bandara also chipped in with valuable 40 runs off 52 balls with 2 fours and a six. Sri LankaU19s will now take on Afghanistan in their next assignment in the quarter final of U19 World Cup.

Sri Lanka U19 won by 3 wickets

The Battle of the Hinduites: A big match in more than...