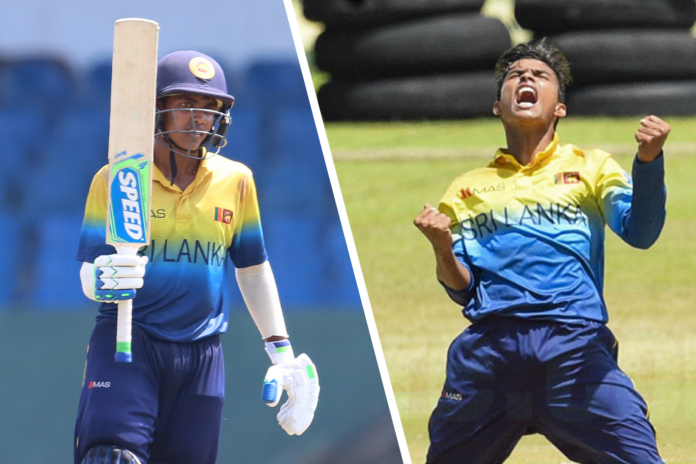 The ACC U19 Asia Cup 2021 got underway today (21st Friday)  in the UAE with Sri Lanka playing their first game against Kuwait U19s which ended in favour of the Lankan youth.

On a visibly flat deck at Sharjah, the Sri Lanka youth skipper called the coin right and took the first lease of the crease.

Sri Lanka got off to a flying start with the bat as the openers, Chamidu Wickramasinghe (54) and Shevon Daniel (54), posted a 91-run stand for the first wicket and each of them made fine fifties.

Building up on that start, the next three in line, Sadisha Rajapaksa, Pawan Pathiraja and Ranuda Somarathne all went after the Kuwait bowling helping the team post a mountainous 323 runs on the board.

Rajapaksa was the only one among the top five to miss out on a half-century as he fell for a busy 35 runs.

Somarathne, who seems to be cementing that No. 5 position in the line-up with consistent performances made sure he upheld the trust placed on him with another fruitful 60 runs off 57 deliveries and remained unbeaten on the crease.

Speaking of consistency, how can one not notice the lucid dependability that the young Pawan Pathiraja portrays in his batting right from the time he made his Sri Lanka U19 debut. He scored a brisk 86 runs while still managing to keep up the elegance in his strokeplay. The southpaw hit 11 fours in his 72-balls stay at the centre.

Come bowling, it was a very brief day at work for the young Lions. Wellalage led the wickets chart with 4 wickets to his name while the additional option, Sadisha Rajapaksa bagged  3 scalps as a bonus. It only took 9 deliveries for Wellalage to pick up his wickets giving away only 2 runs.

The Kuwait batter had no answers for the Lankan bowling attack. Especially to the rockets shot out by the slingy seamer Matheesha Pathirana. He picked up 2 wickets for just 7 runs in his 3 overs.

Team Kuwait lost all their wickets in a cluster as they were wrapped up for just 49 runs in the 18th over.

This Sri Lanka U19 team, led by Dunith Wellalage, has now played 11 games and won 9 out of them including this match. They’ve looked by far one of the strongest outfits in the tournament as per the first day’s games and will look to keep this successful streak going forward.

Sri Lanka U19s will play Nepal U19s on the boxing day at the same venue.