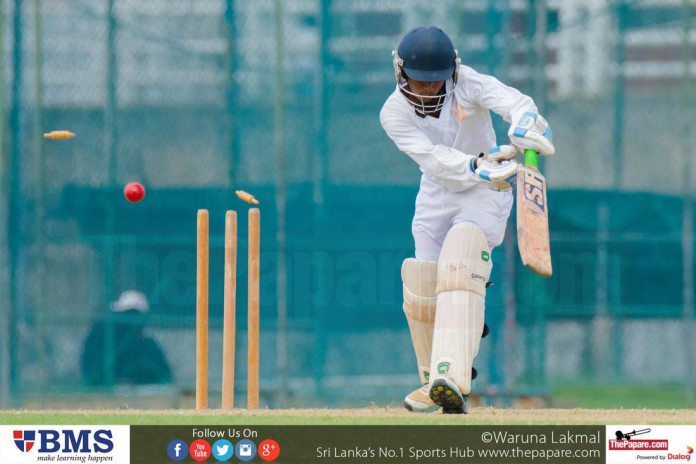 The 2nd round matches of the Singer U15 Div I cricket tournament is underway. Here’s brief look into a few of the matches which concluded in the last two days.

St Sebastian’s College put up a dominating performance against Ananda College to register an innings and 61 run victory in Moratuwa. After being put in to bat first, Ananda College was bowled out for just 55 runs thanks to a combined bowling effort by Nadeera Fernando and Dumith Wellalage who bagged four wickets each. In reply, the home side declared their innings at 193 for 4 which gave them ample time to go for an outright victory. Vihanga Mendis missed of St Sebastian’s missed out on a century when he was dismissed for 99. Ananda just couldn’t find a way to survive the pressure and they were bundled out for just 77 runs. Dumith Wellalage bagged 6 wickets in the 2nd innings to complete his ten wicket haul in the match.

Result – St Sebastian’s won by an innings and 61 runs

A complete performance by the De Mazenod juniors saw them securing first innings points in this group W clash in Kurunagala. Maliyadewa College was bowled out for 155 after being put in to bat first and in reply De Mazenod posted 194 for 9 before they declared. At stumps Maliyadewa were 66 for 3 in their 2nd innings.

Dumindu Udugama’s five wicket haul helped DSS to register an easy first innings victory over Karandeniya Central College. Karandeniya Central was bowled out for 171 runs and in reply DSS were 201 for 7 at stumps with valuable half centuries from Teron Shanel and Missaka Nadun.

Royal College, Panadura registered an easy first innings victory against Thurstan College at the Thurstan Grounds. Thurstan was bowled out for 104 and in reply Royal scored 196 which secured them first innings points.