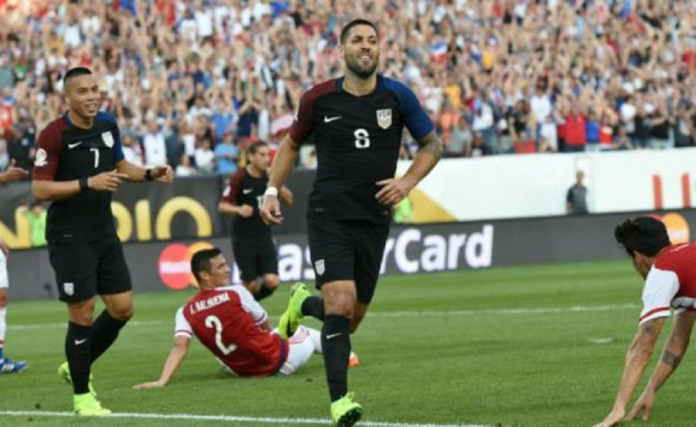 The United States beat Paraguay 1-0 and advanced to the quarter-finals of the Copa America as Group A winners on Saturday after Costa Rica stunned already-qualified Colombia 3-2.

The United States, who are hosting the tournament in its 100th anniversary, will next play the second-placed team in Group B. As it stands, Brazil top that group ahead of Peru and Ecuador, with Haiti already eliminated.

U.S. forward Clint Dempsey converted a low cross from Gyasi Zardes in the 27th minute as the hosts had the better of the early exchanges.

However, the Americans were reduced to 10 men shortly after half-time when right back DeAndre Yedlin received two yellow cards within a minute for aggressive tackles.

The United States looked set to fall behind in the 11th minute when Paraguay had a three-on-one break but defender John Brooks chased down Miguel Almiron to deliver a terrific sliding challenge and knock the ball out of play.

Goalkeeper Brad Guzan, who made key saves from Jorge Benitez and Almiron in the 82nd minute, paid tribute to his defence.

“The guys in front of me were fantastic,” said Guzan. “Every now and then it’s up to the goalkeeper to come up with the save and I was lucky enough to do that tonight.”

Fabra turned villain in the 34th minute by scoring an own goal and Celso Borges put the Costa Ricans 3-1 up just before the hour mark.

Colombia’s Marlos Moreno made it 3-2 with 17 minutes left but they could not find the equaliser.