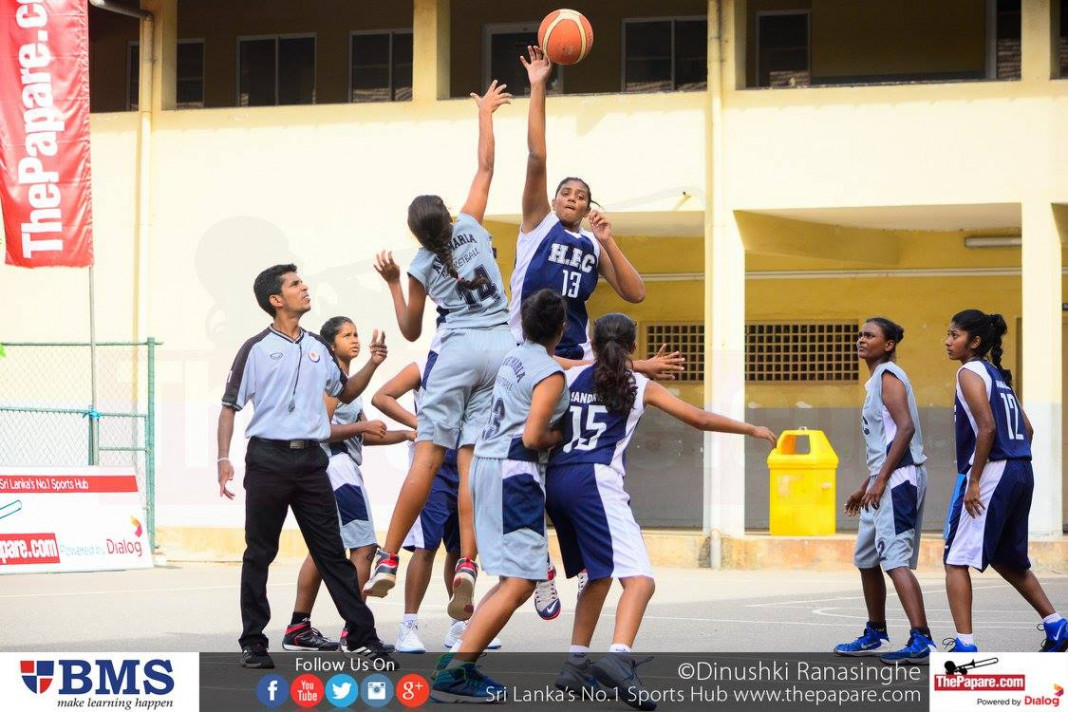 The second match of Group A in the All Island U19 Girls’ A Division ThePapare Basketball Championship was played yesterday at the Holy Family Convent basketball premises. The hosts came back with a robust performance in the second half to beat Ave Maria Convent 47-32.

The HFC girls stepped into the game with a positive mindset after winning their maiden game against Presbyterian Girls’ School, even though it wasn’t their performance.

The traditional jump ball start was won by the hosts but they failed to convert it into a scoring opportunity. The visitors too failed to get the party started as time ran out on the shot clock on their first possession. However, Chethma drew first blood for AMC soon after. The teams matched each other in height and it was a real test for Manthila from HFC to grab the rebounds. AMC’s Christina outsmarted Manthila quite brilliantly and claimed most of the offensive and defensive rebounds in the first ten minutes. This was the prime reason for the difference in the scorecard as the second chances were converted by the girls from AMC.

Dilumi Goonewardena squared the game for HFC as the second quarter commenced. It was a tight contest between the two teams as the score remained unmoved for more than a couple of minutes; the visitors were on top with the rebounding. Both sides opted for a sagging defense while on the offense both sides penetrated in filling the lanes. Dilumi added six points for the hosts as they scored ten points in reply to the nine points of their counterparts. Both teams committed unforced errors and it was just a matter of who could handle the pressure best and convert the possessions into scoring opportunities. Ave Maria Convent led the game by a point going into lemons.

After a much needed ten-minute break both teams stepped on the court to grab the fate of the game. Yet unexpectedly AMC lost the plot.

Christina`s tired legs did not allow them to claim the rebounds as they pleased and HFC dominated the third quarter. With pressure piling up, signs of frustration seeped into AMC’s game and they gradually began to lose ground. It was a pity to witness a ship-shape start being drowned effortlessly.

The HFC girls, capitalizing on the mistakes, ran riot in the visitors’ defense as they scored at will. Dilumi added seven points in the third quarter while Manthila added another eight points.

HFC shifted the fate of the game as they led 38-25 at the end of the third quarter.

There was not much of a difference in the final ten minutes of the game as HFC completely bombarded the defense of the visitors. Rebounds never came for AMC while connecting shots in the offense was just a misery. The team that led the game by a point at halftime only scored seven points in the entire quarter.