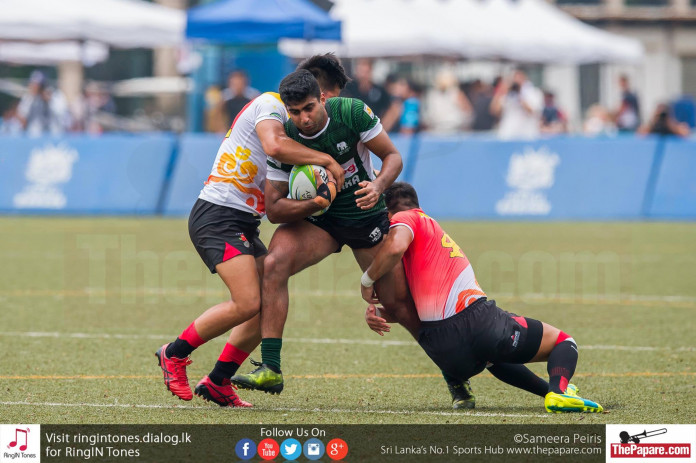 China stormed past Sri Lanka in the Cup semi-final in Hong Kong today. The islanders were no match against the strong Chinese as they took the win 36 points to 12.

China kicked off proceedings drawing first blood in the 2nd minute through a converted try from Gao Bing.  He got the ball in the 40m line, fended off Muthuthanthri, held off Soori and easily went over the line to score. Conversion was successful by Shan Chang. (CHINA 7 – SL 00)

Their domination continued as they added 7 more points in the next minute. The Sri Lankan scrum was turned over with brute strength from the Chinese forcing the Tuskers to concede a penalty inside their own 40m. Without wasting any time, they took the quick tap gave the ball Shan Chang who went over to score under the post. (CHINA 14 – SL 00)

China extended their lead up to 21 points in the 5th minute through another converted try. Tuskers yet again crumbling under pressure in their own half. This time they were penalized for coming from the side 5m away from the try line. Chinese smelled blood, took the quick tap once again and this time it was the big Chen Yong who stormed through the defense to score. (CHINA 21 – SL 00)

Before the break, the Tuskers finally found their footing. Kavindu Perera made the initial breakthrough from their own half. Muthuthanthri and Ratwatte forced their way through to gain some more yards and managed to win themselves a penalty and had the Chinese defense in disarray. They quickly pounced on the opportunity to get 5 points on board before going for a breather.

The Tuskers had to start off well in the second half and they did so quite convincingly. Omalka Gunarathne coming from the bench gave the Chinese a reminder that Sri Lanka had a bit more. The big forward stormed his with way through the defenses to score the 2nd try which was converted by Ratwatte. (CHINA 21 – SL 12)

They had to keep up the tempo against the Chinese if they were to turn the match around, but the Chinese kept their composure till the very end. Their 4th try came soon after as they turned over the ball inside the Sri Lankan half and it was Shan Chang who went over to complete his hattrick. (CHINA 26 – SL 12)

The dominant Chinese sealed the game with their 5th try. Once again the Tuskers crumbled under pressure and the Chinese pounced on it with ease. They finished the match with another try to extend tally up to 36 points against 12 which was the scored by the Tuskers.

Sri Lanka will face Malaysia in the Plate semi-final later this afternoon.