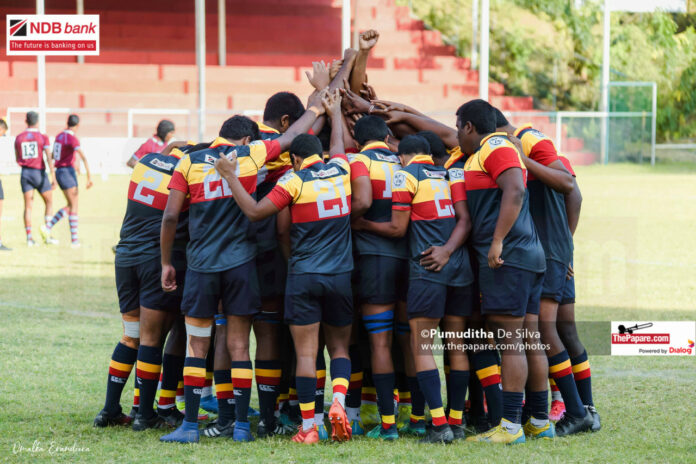 The game was played under ideal weather conditions for a game of Rugby with a cool breeze blowing through the field throughout the game.

Rajans started off strong, putting the Lions under pressure from the first whistle, which they could not hold on to as Trinity pounced on the first opportunity presented to them.

Trinity managed to score 2 converted tries within the first 15 minutes but couldn’t break through the strong Ranjan’s defence throughout the rest of the first half.

Lithmal Moragoda managed to get his name up on the scorecard first by collecting a well-placed kick by Minidu Jayasundara off the scrum. (TCK 7-0 DRCK)

Soon after his assist, Minidu Jayasundara managed to extend his team’s lead by scoring a try off a brilliant interception by Lithmal Moragoda which left the Dharmaraja defence bamboozled. (TCK 7-0 DRCK)

Dharmaraja College managed to keep the Trinity attack at bay with their rushed-up defence throughout the remainder of the first half but could not capitalise on the opportunities that were presented to them to narrow down the deficit.

Dharmaraja College who had an exciting defensive structure during the latter part of the first half could not keep the Lions at bay in the second half as Trinity managed to score 4 more tries.

Rajans conceded the first Try of the second half by giving away a penalty 5m away from their try line. Trinity skipper with no hesitation opted to take the penalty quickly and used his forwards to put pressure on the Ranjan’s defence. ThePapare.com Player of the Match second row of Trinity College, Bawantha Dharmapala managed to get his name on the score sheet by barging through the unsettled defence of the Ranjans. (TCK 19-0 DRCK)

Trinity forwards got into the action with a well set up maul 15m away from the try line which opened up ample space in the centre of the field for Moragoda to score his second try of the game.  (TCK 26-0 DRCK)

With the backs snatching up the earlier try, the forwards of Trinity decided to use yet another set piece through a line-out at the exact position as the previous occasion. This time around Trinity forwards managed to disrupt the Ranjan’s defence by setting up a fake maul which opened up ample space for the substitute prop forward Amarasingha to score the 5th try of the game. (TCK 33-0 DRCK)

With less than 6 minutes to go, Dharmaraja College were presented with an opportunity to get to get out of jail after being put under pressure in their own 10m mark for well over 5 minutes. Ranjans kicker missed out on clearing the ball into touch. Trinity backs capitalised on this mistake with a brilliant counterattack which opened up space for the substitute wing three quarter to score the final try for Trinity. (TCK 40-0 DRCK)

Trinity were awarded a penalty 35m away from the try line in the final minute of the game. Stand in skipper Thanthirige took a sensible decision of opting to go for a conversation. Minidu Jayasundara made no mistake with the conversion and brought Trinity’s final total up to 43 points.