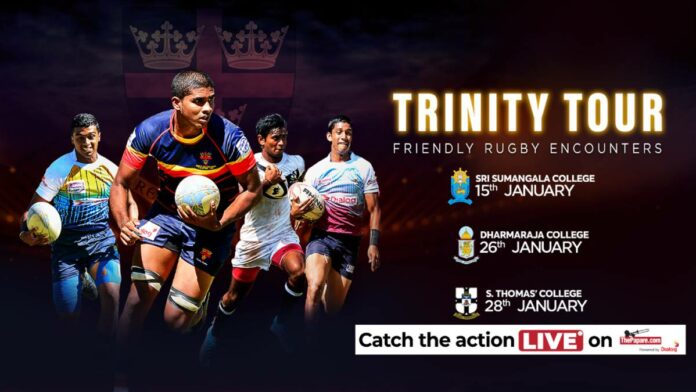 Trinity College Kandy, one of the pioneers in introducing Schools Rugby to the Island are set to usher in 15-a- side rugby back after a long hiatus of close to two years with a series of friendly encounters in the coming days.

Trinity College, who are celebrating their sesquicentennial anniversary with T150 celebrations this year are planning to provide their players from the class of 2021 an opportunity to don the Red Gold Blue striped jersey before leaving college. It’s a great initiative by Trinity to play these friendly encounters as some of the players would have missed out on playing in a 1st XV team due to no XV’s rugby being played since March 2020.

Speaking on the importance of these games, Head coach of the Trinity outfit Kavinda Jayasena added that ‘These boys have played rugby throughout their school career for the junior teams and it’s important that they are given the opportunity to represent the College 1st XV before they leave school, with no rugby happening in the past year some of the boys missed out on the best rugby of two years of their schools rugby career and some will not even receive a jersey of colors, I am delighted that we are able to provide this opportunity for the class of 2021 and hope that this will provide them the motivation to continue playing the game’.

Trinity who emerged as the Central Province Champions at the recently concluded Dialog Schools Rugby 7s competition will kick off the friendlies against Wariyapola Sri Sumangala College Kandy (WSSCK) on 15th January at Trinity College Rugby Stadium, WSSCK were undoubtedly the most improved team at the Dialog Schools Rugby Sevens Central Province competition.  They have had steady progress in recent years especially in the shorter format of the game and will relish the opportunity of being able to ply their trade against one of the heavyweights of schools rugby in the country.

Trinity will host Dharmaraja College Kandy on the 26th of January at Pallekele as their second friendly encounter. Rajans have always been a force to be reckoned with in the Schools rugby arena where they consistently pose a threat to other schools in the top division. Dharmaraja will be determined to record their first victory against the lions who boast of an unblemished record against the Rajans.

After the hit out against the Rajans, the lions will only have a very short turnaround as they are set to travel to the capital the very next day and will take of the ‘school by the sea’ S.Thomas’ College, Mount Lavinia on 28th of January at the Air Force ground in Ratmalana. This encounter will be played for the much sought-after ‘Cannon R S De Seram trophy’ which was first awarded in the year 1978. The two teams last met just before the pandemic enforced lockdown on the 6th March 2020 where Trinity managed to clinch the game 17-08 after a hard-fought game.

All games will be live-streamed on all platforms of Sri Lanka’s #1 Sports Hub, ThePapare.com. Overseas viewers will be able to enjoy the return of XV-a-side action by purchasing a tour pass that covers all three games priced at Rs.199.