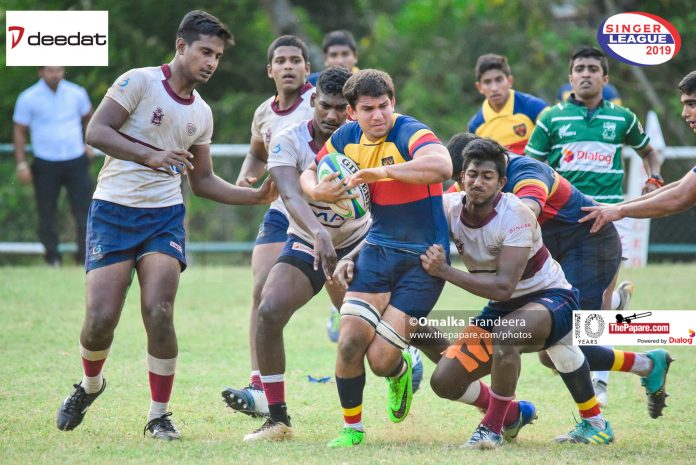 Trinity College bounced back in style with an impressive 50-20 win over Science College in their Singer Schools Rugby League encounter at the Trinity College Rugby grounds in Pallekalle.

After suffering a defeat to the Joes in Havelock Park last weekend, there was some pressure put on Trinity but they delivered a fine all-round effort and dominated most facets of the game to come away with a comfortable win.

By contrast, the Science’ performance was error-strewn and they battled to contain the Trinity backline who eventually outscored their hosts by 8 tries to three.

Harsha Samarasinghe was in fine form for the lions as he scored a hattrick of tries and Mecan Yashwanth, Geeshapa Kulatunga, Amith Kulathunga and Minidu Jayasundara also crossed the whitewash for the hosts.

Science made a bright start and opened the scoring courtesy of a sprint down the left corner in the second minute by Tharusha Silva, whose try was subsequently converted. That was the only time the home side would hold the lead as the Trinitians soon took control of proceedings and Geeshapa Kulathunga scored the opening try for them in the 8th minute, in the corner. (TCK 05-07 SC)

The home side took the lead when Akmeemana failed to deal with a lovely set move as Harsha Samarasinghe gathered the ball before pouncing on a huge gap between the centers close to his try-line. Trinity didn’t stop at that, as soon after Thidas Thanthirige ran in for the third try for the Lions in the corner after the scrum half Karunayake sent the ball out wide to the stranded number 8 acting almost as a winger. (TCK 19-07 SC)

Next up Harsha Samarasinghe went inside out when the forwards gave him a chance to run at the Science line collecting a brace at that point of the game. He showed brilliant pace and game sense stepping past the awestruck Science defense. (TCK 24-07 SC)

Hasaranga Akmeemana then brought back the deficit through a silly penalty for a high tackle on their captain Shashin Munasinghe. (TCK 24-10 SC)

Mecan Yaswanth touched down for Trinity College on the brink half-time, this time Trinity scored through their forwards as the big lock barged over the whitewash. Trinity settled down as the game progressed and when they did settle themselves down, they showed that they were surely a force to be reckoned with as they went to half time 29-10.

Anyone thinking that halftime would halt Trinity’s newfound momentum would’ve found themselves sorely mistaken as they continued just as they had left off after the break.

Science scored next to give Trinity a little scare as they scored two beautiful tries using the width of the field using their wingers Dulaj Madapathage and Nishitha Vithanage. There were numbers out wide as Science brought the deficit within 9 points.

After some nervous exchanges, a successful turnover and quick dart from Tehan Karunanayake, the scrumhalf set the ball up perfectly for a charging Harsha Samarasinghe to pick it up and storm over the line to put them away further. (TCK 36-20 SC)

Not even another three minutes later the floodgates had fully opened with Amith Kulathunga adding his first try of the match. Trinity recovered a spilled ball from Science and unleashed the pacey Kulathunga, who turned on the gas to run it over the line from 46-metres out making the score 42-20.

Trinity stepped up a couple of gears on attack after the break while Science committed a plethora of unforced errors as they tried to haul the opponents.

Minidu Jayasundara then crossed for his first try shortly before the final whistle as the high ball collected by the fly-half was weaved away by himself over the line to give Trinity a commanding lead.

A spirited Trinity outfit managed to hold on to the ball in the dying embers and grind out a deserved win, causing somewhat of a traffic jam in the points table and raising plenty of eyebrows come the second round. (TCK 50-20 SC)