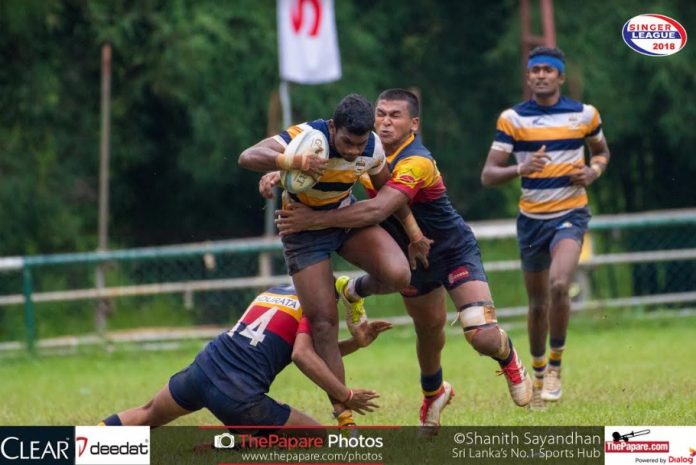 St. Peter’s College got their Singer School’s Rugby League campaign back on track after the two-week break when they claimed a hard-fought 28-21 victory over Trinity College in Pallekale earlier this evening after leading 14-nil at half-time. With the victory St. Peter’s managed to retain the Denis Perera trophy for the 4th consecutive year.

As expected the encounter turned out to be an entertaining affair with both sides employing expansive game-plans, running from their own goal-lines and trying out a few fancy passes in the process of doing so. However, St. Peter’s got the victory pats on their backs in the end as they went on to outscore the Lions in their own den 4 tries to 3. The result means that St. Peter’s have consolidated on their second position in the Singer Schools’ Rugby League points table, while the Lions will go down further with their second successive and fourth overall defeat.

The Peterites’ game was full of aggression with a great deal of physicality present in contact and breakdowns as they took control of proceedings as the 1st half progressed. For a team that usually feeds on the set-pieces, the Trinity line-outs more were uncharacteristically sloppy, producing too many little errors which in the end, cost them.

St Peter’s came out flying off the blocks, immediately working themselves up into Trinity territory. The Trinity forwards, after a spell of sustained pressure, won the turnover but were penalized inches from their own try-line while trying to work their way out of trouble towards safety. The Peterites drove the ball forward from the resulting scrum via a clinical number 8 break to be held agonizingly close to the try-line before Jason Karunarathne sent Rukshan Madhusanka over the line courtesy of a cut-out pass from the base of the ruck. Shehan Liyanapathirana added the extras. (SPC 07-00 TCK)

The next quarter hour was an arm wrestle as both sides tried to gain the ascendancy, however it was pretty clear that St Peter’s had the upper hand as the minutes went by as they did all the attacking while the Lions were pushed back into their red zone breakdown after breakdown. On the brink of halftime, the Peterites deservingly doubled their lead as Julian Charles ran onto an inside pass from Jason Karunarathne inside the Trinity 22m, took on a couple of defenders before throwing a perfectly-weighted pass to Javindu Fernando, who dotted down for the try. Liyanapathirana added the extras bringing the game to halftime. (SPC 14-00)

After a sloppy start to the second half which saw both sides making a number of handling errors similar to the 35-minute quota in the first half, the Petes camped inside the Trinity 5m line. Their set-piece strength has always been a pillar of their success and hence from a lineout driving maul they scored their third try of the game, Julian Charles emerging with the ball from the pile of bodies. Liyanapathirana chipped the conversion over to add the extras. (SPC 21-00 TCK)

Finally, mid-way through the second half Trinity narrowed the gap after being on the ropes for almost the entire game. Building up a few good phases Amith Kulathunga released the dangerous Vishwa Ranaraja into space through a lovely cut-out overhead pass over the two centers for a step and stroll over the line. Akitha Sakalasooriya bisected the posts from the right flank. (SPC 21-07 TCK)

Trinity were nowhere close being done at this point as they pounced on every opportunity that came their way, feeding on the momentum on the back of the Ranaraja try. Their forwards, who were kept silent by the visitors, started pumping their way through the defense. Halted under the posts Akitha Sakalasooriya called for the ball meters out with Ranaraja hovering in the corner. The Peterite defense, which started drifting to cover Ranaraja, left a hole for Sakalasooriya to creep through and curl back under the posts to add the extras on his own to make it 21-14.

The Peterites hit back immediately, extending their lead against the run of play. Shehan Liyanapathirana pounced on a loose pass and did well to spot the space behind the defense, chipping the ball over after getting on the outside resulting in a knock-on from the Trinity sweeper. St. Peter’s piled on the pressure through their forwards close to the try line and were rewarded minutes later when Nizran Nilhar scored under the posts for a deserved try. Liyanapathirana converted to keep a 100% record in the game. (SPC 28-14 TCK)

Liyanapathirana managed to make the difference between the two teams as his kicks were on-point both off the kicking tee and as a full-back exploiting the space behind the Trinity defense. His long kicks earned them the much-needed territory while in attack he was brilliant in joining the line to add that extra flare. 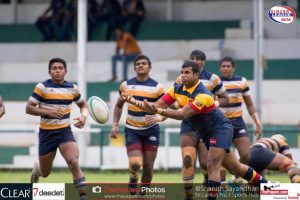 Just when Trinity looked down and out, Fly-Half Akitha Sakalasooriya showed some individual brilliance, scoring a magnificent try through the fringes in which he ran all the way from his own half; after spotting a gap on the blind side from behind the ruck, Sakalasooriya accelerated into space. He himself took the conversion with great urgency so that there was still time for the restart, setting up a nail biting final few seconds in which a converted try would see St Peter’s through to a 28 all draw.

Just as it looked like Trinity might do the impossible and score once again, their flanker knocked the ball-on, resulting a scrum to the opposition to deny their comeback as St Peter’s held on for the 28-21 win.