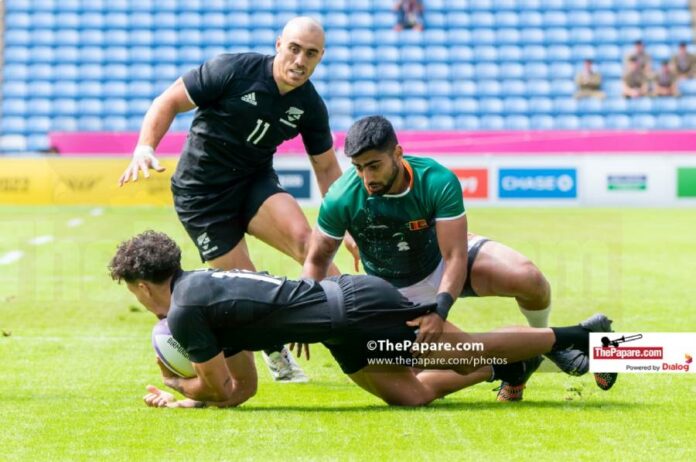 With Rugby 7s kicking off at the Coventry Stadium on the opening day of at the 2022 Birmingham Commonwealth Games, both Sri Lankan men and women who were pooled alongside heavy weights of the shorter format faced a stern challenge in the games they played on Day 02.

Both Sri Lankan men and women succumbed to defeats in their two games with the oppositions racking up 50+ in the first three games but the Tuskers showcasing great resolve in the final game of the day.

Sri Lankan Women, who made their debut in at the Commonwealth Games , becoming the first Asian women’s team to feature in the competition had their work cut out as they faced host England. English were ruthless and the Lankan lasses were simply outmuscled as they ran away with a nine try 57-00 win at full time having led 24-00 at half time. For England Ellie Boatman had a top-notch outing scoring 4 tries. (FT ENG 57-00 SRI)

Sri Lankan men met their oldest foe at the Commonwealth Games in this years opening edition with being drawn up against the strong New Zealand side who were incidentally their first opponent in their debut campaign in 19987. The Defending champions, New Zealand put down a marker and made their intentions clear with a strong all round performance that sent a clear message to all other teams. New Zealand ran in 9 tries with the final scores reading 63-5 at full time. New Zealand never looked trouble as they piled up 35 points in the second half to the already comfortable 28-5 lead they had at half time. The moment of the game however came when Sri Lanka’s Tarinda Ratwatte entered the history books scoring Sri Lanka’s maiden try against New Zealand. The entire Coventry stadium celebrated the try making it a little more special for Ratwatte and the Sri Lankans. (FT NZL 63-05 SRI)

The second session of day one was played in front of a much larger crowed at the Coventry stadium and despite games commencing at 5.30pm UK time and going on till 10.00pm it was bright until past 8.00pm.

Sri Lanka women played their second game against the might New Zealand women who came into the game after a terrific 45-7 win against the strong Canadian outfit. The gulf between the two teams was evident from the get go as the superior Kiwis managed to score three back to back tries through the restarts untouched. New Zealand’s ten try fest was set alight their superstar Michela Blyde

Sri Lankan men played their second and last game against host England. The tuskers despite being ruthlessly out muscled and overpowered, never gave up and were never back down from a contact which was heartfelt to see. England received a yellow card for cynical obstruction of play and Sri Lanka pounced straight away with thier skipper nippy Srinath Sooriyabandara scoring under the post at the brink of half time with the score reading 26-07.

Sri Lankan’s had their tails up after the lemons with the numerical advantage favoring them and having gone into half time scoring a try. Tharinda Ratwatte managed to pounce on a lose pass by England to score under the post to make the score 26-14.

Then came the moment of the game where the Tuskers really pulled one out of the hat with a brilliantly using the width of the field with slick passing as they scored through Buddima Piyarathna in the corner to make it three in a row and 26-19 which mellowed the rousing home fans at Coventry stadium. English re grouped and used their superiority to deliver the finishing touches running in 3 more scores winning the game 47-19.

Despite the loss the determined tuskers were never humiliated, they looked threatening throughout the game and the gut they showed in contact against the much physically superior athletes was admired by the entire stadium.

Both Sri Lanka Women and Men will play their last group game tomorrow. Sri Lankan lases will meet Canada in their final group game 2.15pm SL time while the Tuskers will have another stern battle against Samoa at 3.42pm who will want to put the disappointment of the loss to New Zealand in their second game having started strong and led 17-00 at half time.