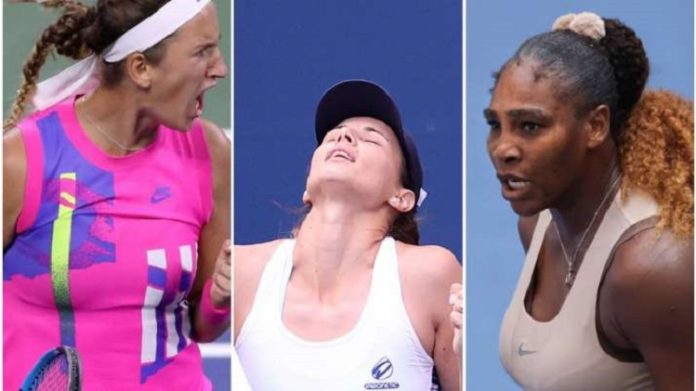 History was made earlier this week at the U.S. Open, where three moms advanced to the quarterfinals of a Grand Slam for the first time in the professional era.

Serena Williams, Tsvetana Pironkova and Victoria Azarenka all won fourth-round matches in New York in a first since at least 1968, when the Open Era began, according to the tournament.

“I just have a totally new respect for moms,” Williams said between her third and fourth-round matches. “I would never have thought I would be playing as a mom. … The pluses are that, one day your daughter can say she was there. Whether she remembers or not, we can always have pictures. But other than that, it’s just minus, like, I’m not with her. I’m not around her. It’s hard.”

Later in the afternoon, the Bulgarian Pironkova dispatched Frenchwoman Alize Cornet 6-4, 6-7 (5), 6-3 to set up a Wednesday quarterfinal with Williams.

Pironkova, who had son Alexander in April 2018, is playing her first tournament of any kind in three years. She returned to tennis training eight months ago and is bidding to go 10 years between Grand Slam semifinal appearances.

“Everything in mothering, I guess, it’s helped me,” Pironkova said. “Obviously you become a different person. You don’t focus on yourself that much anymore, like your focus is primary on your child. And I guess that’s a good thing. I’m a lot more organized, as well. Mentally, I have more mental endurance, also. Physically, I know my body better.”

Azarenka, who won two Australian Opens and made 16 total Grand Slam quarterfinals before having son Leo in December 2016, is into the last eight of a major for the first time as a mom.

“I don’t know if I feel different just because as a mother,” the Belarusian said. “I don’t identify myself on the tennis court as a mother. I still identify myself as a tennis player. Me being in the quarterfinals, I didn’t get there by being a parent. I got there by being a tennis player. But it feels amazing that I can share this moment, and hopefully be a good role model to my son.”

Other moms who excelled in tennis

Margaret Court of Australia won three grand slams as a mom. Evonne Cawley, Kim Clijsters are among the strong women who have top honors to their names after childbirth.