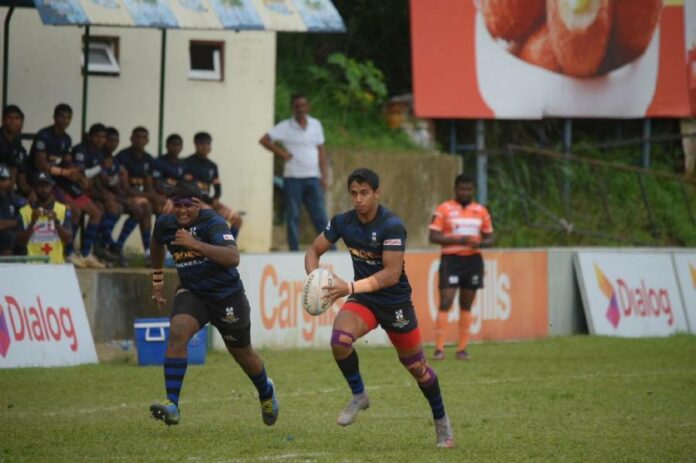 The Thomians’ have made it back to back wins to end the Dialog School’s Rugby season, seeing off a dogged Kingswood outfit in a 36-08 win.

The visitors came out breathing fire at Nittawela Stadium and led 10-0 before they’d had to make a single tackle, and held strong when Kingswood finally brought some sort of a challenge.

Both tries were scored by Akira Perera who dazzled his way over the whitewash courtesy of some good work by the backs. (S.Thomas’ 10-0 Kingswood)

Kingswood then showed some sort of a fightback scoring the next try. L.Dharmasena picked up and went over the line after about 5 phases of forwards play. (S.Thomas 10-5 Kingswood)

Kingswood cut down the deficit to just two points with a penalty from the boot of Imanka Ishara resulting from an offside call. (S.Thomas’ 10-8 Kingswood)

The Thomians took control once again at the end of the half, scoring again through D.Fernando to extend the lead. Yehan Bulathsinhalage this time added the extras despite hitting the uprights on both previous occasions. (S.Thomas’ 17-8 Kingswood)

Right after half time R. Kurukulasuriya gave the Thomians some breathing room with another 12 phase try under the posts. Yehan Bulathsinhalage added the extras. (S.Thomas’ 24-8 Kingswood)

R De Silva got the Thomians scored again with a brilliant solo effort, running around the Kingswood defense into the corner to dot down over the try-line. (S.Thomas’ 29-8 Kingswood)

A 17-8 halftime lead was doubled when G.Lenagala scored, before Kingswood applied some pressure to go with the replacements of the Thomians. M. Perera added the extras. (S.Thomas’ 36-8 Kingswood)

Akira Perera was outstanding, while D. Fernando produced a string of heavy carries that drove the Thomians forward at will.