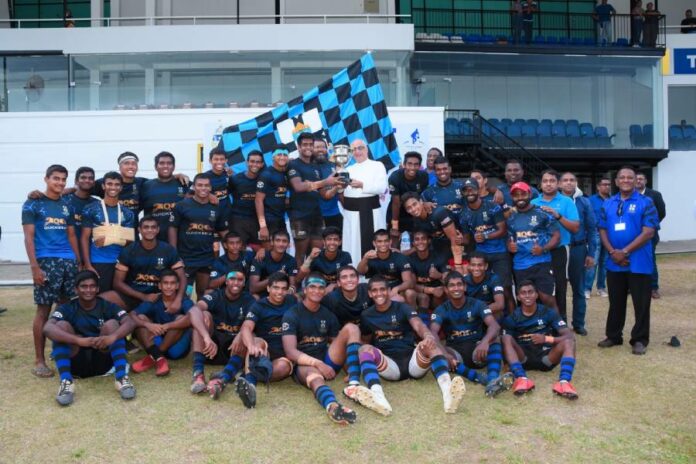 The hosts were minus skipper Sudesh Jayawickrama while the visitors fielded a full-strength outfit, aiming to retain the trophy they last won in 2019 – with 2020 and 2021 not being played due to the pandemic.

It was the Thomians who opened the scoring through the big prop forward Jonathan Bulathsinhala as he gave the perfect start 4-minutes into the game.

Peterite fullback Kushan Tharindu put his team in the lead for the first time in the game as he brought about the razzle-dazzle to score in the corner.

Moments later, flanker Hirun Gunarathne charged down the resulting restart to score a run-away try to double the host try tally in the game

Emit Jayaweera pierced the posts on both occasions to take make it a perfect 14 as momentum shifted. (SPC 14-05 STC)

The visitors held off wave after wave of attack from the home team, turning the momentum on its head once again.

This turnaround yielded three further tries to the Thomians as Mahith Perera snipped through to score the first of three consecutive tries.

Next, it was Centre Rehan Wickramasuriya who broker the first line of defense, beating the fullback to score a solo effort. A third of the lot was scored by Dela as the tall Lock Forward found himself crashing over, all scored before the hooter to shock the onlooking St. Peter’s faithful.

Yehan Bulathsinhalage forgot his kicking boots in the sheds as he failed with all three conversions, however, the visitors took in a six-point lead into the lemons.

The hosts started the second half with a score through Chathumina Nethsara as coach Sanath Martis laid down the law following a torrid first half, not forgetting the dismal league campaign.

Replacement five-eighth Windya Demel failed with the extras, however, a penalty shortly after meant the home team took a two-point lead with more than 20-minutes left. (SPC 22-20 STC)

Bulathsinhalage knocked over his first attempt in the second half, unsurprisingly, as the Thomians grabbed a single-point lead going into the final quarter of the game.

The home team attacked, wave after wave, however, sublime defense coupled with errors from the Pete’s meant the visitors held on to the single-point lead to secure a nail-biting win to retain the Archibald Perera Memorial Trophy.