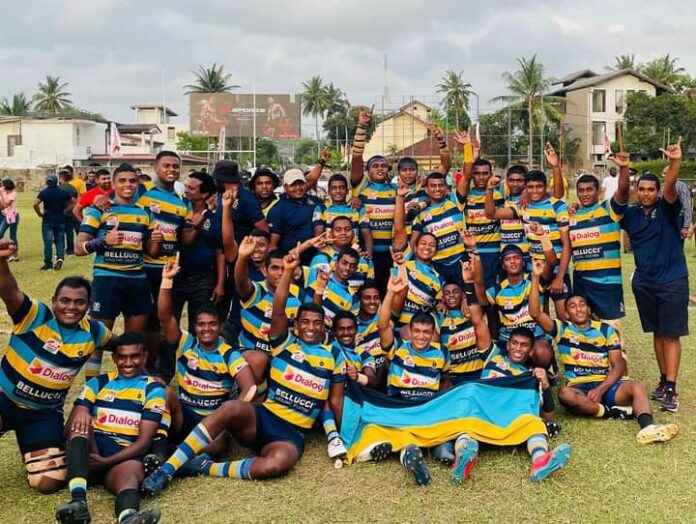 Vidyartha, having beaten St. Peter’s College, Dharmaraja College and Science College in three consecutive wins, have kept their hopes of qualifying for the Super Round well and truly alive as Science College hosted their first home game in their own backyard after a lapse of at least two years.

The visitors opened the scoring in the 5th minute through prop forward Kavishka Wijerathne, after their forwards dominated the first few minutes. Menuka Thilakarathne could not manage to add the extras to the score line (SC 00-05 VCK).

Science College did not back down after the early blow and managed to dominate possession. Vidyartha was pinned in their own half and could not handle the immense pressure put on them, which led them to leak back-to-back penalties. After multiple failed scoring attempts, Nadun Kaveesha, the playmaker of Science College, successfully converted a penalty to reduce the deficit.

NDB player of the match, Kavishka Wijerathne, made sure that his presence was felt when he barged through the Science defense to score his second try, minutes away from half time.

Both teams were struggling to get back into rhythm in the second half as they gave away multiple penalties. Vidyartha College took this opportunity to extend their lead through a successful penalty conversion by Menuka Thillakarathne.

As soon as the final quarter of the game began, the hosts brought in plenty of fresh legs on to the field, all of which paved the way for Nadun Kaveesha to score two more penalty kicks, bringing the deficit down to 4 points. (SC 09-13 VCK)

With only five minutes left on the clock, Vidyartha College was gifted a penalty right in front of the posts, which they could not convert. If it was successful, then they could have had some breathing space until the final whistle was blown.

Although there were continuous questions asked by the Science offense, the Vidyartha defense showed that they were up for the challenge by holding on to the slender lead they had throughout the second half until the final whistle to win the game.