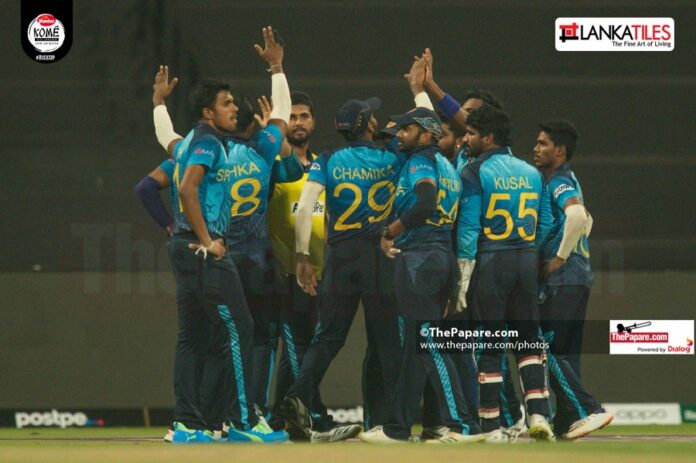 Not often fans feel content when their team gets knocked out from an ICC event. This time it has been a different feeling.

Sri Lanka came into the competition with people ridiculing them but they performed beyond expectations. At one stage, Morne Morkel called the Sri Lankans the ‘dark horses’ while Eoin Morgan’s paid the biggest complement when he said, ‘Sri Lanka have pushed us and boxed above their weight.’ Five wins and three losses is not bad at all. Sri Lanka came, they fought and they have conquered the hearts of their fans.

It has been all downhill in cricket in the last three years or so and when the suspension of three key players happened in June, Sri Lanka were staring down the barrel. The Dutch even thought that the former champions will not go through to the second round. But there’s been some sensational cricket over the last two weeks. A few mistakes cost them dearly but as fast bowling legend Dale Steyn told The Papare in an interview, the only way to learn is by playing more international cricket.

Mind you more than half of the players in this team had played less than ten T20 Internationals when they landed in Dubai for the World Cup. That makes this performance even more creditable.

At the beginning of this year, Charith Asalanka and Pathum Nissanaka were unheard of even among local fans. But a stunning campaign has seen them gaining the admiration of cricket enthusiasts all over the world.

The flick shot that Nissanka played moving to the off-stump to Ravi Rampaul was stunning. It was almost Steven Smith like. Asalanka’s appetite for big runs is Kumar Sangakkara like. The two former Sri Lanka Under-19 players had such an impact that they emerged as the two leading run getters of the event when their campaign ended on Thursday in Abu Dhabi when they beat West Indies.

At the start of the World Cup with some players roles defined as ‘floaters’, Asalanka and Nissanka were expected to hold the innings together. But they did much more than that. With Kusal Perera and Avishka Fernando, the two big hitters, not firing, the ‘holders’ took up that responsibility too coming up with some calculated assaults.

This World Cup proved that T20 cricket is not all about brutal hitting and touch players still have a role to play. These two are not the type of players who whack the cricket ball beyond 90 meters but they can be mighty effective with their smart improvisation.

Mickey Arthur called Wanindu Hasaranga ‘a world superstar’ and what a year he has had. Since Ajantha Mendis in 2011, no Sri Lankan had been ranked world’s number one bowler in T20 cricket and Hasaranga ended that drought when the International Cricket Council updated the rankings. Into the bargain, he has risen up to number four in the rankings for all rounders and when he concedes that he is a batting all-rounder, there is excitement as he could be equally deadly with the bat. When it was time for Sri Lanka to return home, they not only had the tournament’s highest run scorer but the highest wicket taker too.

There was something mystic about Sri Lankan cricket and they were a ruthless unit that were feared by many opponents. But in the last couple of years, they had lost that glamour and had adopted a lethargic approach. Suddenly Sri Lanka looked like England of 1990s, who had little clue how to play white ball cricket. A shake up was needed and a change of approach has put things back on track.

Former skipper Mahela Jayawardene no doubt had brought in fresh thinking and the team would have loved had he stayed on.

What about Mickey Arthur then? A man who is so used to handle crisis in sports having seen some tough times during his stints with South Africa, Australia and Pakistan. He maneuvered through the rough phases with diligence, focus and hard work and the end result was smooth sailing having come out of the crisis.

Whether Arthur stays or goes will be known shortly but whichever the direction the team is heading, it is better to persevere with some of the key features of Arthur’s tenure like fitness and fielding. Arthur had been bold enough to drop a few players on fitness grounds and it helped some of them bounce back fitter, leaner, stronger and hungrier.

Skipper Dasun Shanaka has not delivered with the bat but more importantly he has brought the young team together and mould them into a unit that is showing character when put under pressure. He needs to be given the longer run at least till the next World Cup down under for Sri Lanka to get the results they desire.

A few question marks will be asked on Kusal Perera. He was a disappointment with the bat and his dropped catches were costly. You need Kusal’s experience in the shorter formats moving forward but whether he should keep wickets should be debated.

All in all it was a brilliant campaign.