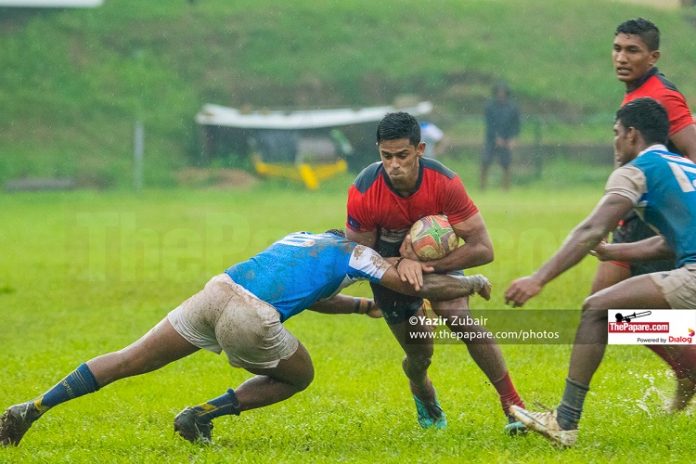 The stars from the schools rugby arena came alive late this year for another episode of the Kandy Colombo rivalry when Nittawela hosted the fixture under the torrid downpour.

With the game set to be a selection trial for the national under 19 side, teams with 31 members were shortlisted with the aim of choosing the best for the country

The hosts, Kandy, under the leadership of the big Antonian Mohammed Shabeer, kicked things off in fashionable style scoring in the very first minutes. A set-piece move saw Vishwa Ranaraja putting his pace to good use drawing the defence and allowing Lahiru Daulagala to score the opener. Ishara Herath of Maliyadeva added the extras (7-0).

Fighting back, the Colombo reply came in the form of Rukshan Madusanka, the sidestepping centre of the Peterites. Seeing the opportunity, Madusanka swayed his way through to score the Blues’ first, next to the upright. Kalindu Nandila’s boot brought in the equalizer.

The wet conditions prevailing at Nittawela was clearly affecting the gameplay with both teams losing possession owing to the weather.

The second for the hosts came when Kandy utilized their strength in the forwards to barge through to the white line. Himalka Dananjaya crossed over giving the hosts the lead.

With seconds to go for halftime, Dulanjana Piyatissa of Colombo almost got his team through to their second try but his pass to Sabith Feroz was deemed forward. Colombo went into halftime trailing.

The second half was nothing short of excitement, with both teams putting up an impressive show in the midfield. Come second half both coaches opted to empty their benches to allow the second set of players enough game time.

Tragedy struck the Kandy Reds’  when an illegal booting by a Kandy player just on the try line saw referee Priyantha Gunaratne awarding a penalty try in favour of the Colombo Blues. (12-14)

The try turned out to be the turning point of the game with the Kandy side not being able to make a comeback from that point.

After using out all of their options, the team opted to go for three points when they were awarded a penalty within kicking distance.

In the absence of Ishara Herath, Vidyartha’s Tharindu Hettiarachchi opted to take the three points but in his attempt to win it for the home side, the kick, unfortunately, drifted left.

The Colombo side took the 1st leg honours winning the encounter 14-12.

The 1st leg saw the likes of Ishara Herath of Kandy, Nikhil De Silva and Dulanjana Piyatissa of Colombo showcasing their colours in an attempt to make it to the national jersey. Kenneth Wimaladasa of St. Peter’s had a successful stint in the Blues’ jersey but we are yet to see a majority of the players showcasing their true potential.