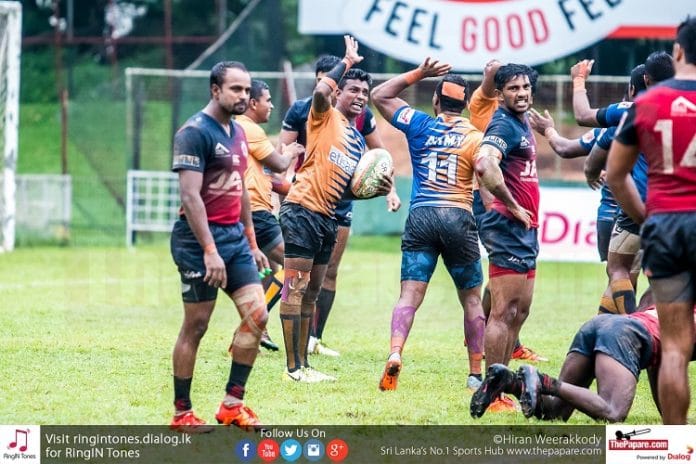 Kandy SC ended unbeaten as the first round of the Dialog Rugby League drew to a close over the last weekend, our team at ThePapare.com looks at the good, bad and ugly from the past 7 weekends of action.

CR produced a stellar comeback to defeat favorites Navy at Longdon Place under perfect conditions for running rugby. Mushin Faleel and Adeesha Weeratunga scored twice in reply to Tarinda Ratwatta’s try of the season contender. CR stormed back from being 7-23 down to win by 15 points. It was a masterclass from Tarinda with the boot and a comeback from the CR lads which raised many eyebrows. Disappointingly, CR were unable to maintain that kind of form through the round.

Before this game, CH had lost 30 games on the trot. CR came in with some excellent form and were expected to cruise to a win over the League’s whipping boys.

Instead, CR shipped penalty after penalty and were disrupted by CH, who ran out winners by a slender 7-point margin, breaking a 30-game hoodoo to win their first game in 2 years.

The rapid rise of the playmaker has more to do than just his ability to distribute. His vision, decision making and game changing ability came to the fore in the first round. His transformation has also spearheaded Army to 4th in the table at the end of the round which would surely delight the lad. He is surely only going to get better as the season goes on.

Dulanjana Wijesinghe is another name worth mentioning, as the Hooker has produced a few marvelous performances to guide Navy.

After contract trouble early on, he made the switch to CR but could not live up to his price tag and expectations. Chandimal started off the season in the No. 10 jumper but a drastic dip in form saw him drop to the bench and even out of the match day squad. With the return of Tarinda Ratwatta to the No. 10 jersey it will be a tough task for him to get back into reckoning.

Omalka Gunaratne may be another looking over his shoulder. Injury did not help his cause, however, he will surely need a few good performances under his belt to boost his confidence and get back to form.

6 defeats and a draw, the Cops put up a fight on just one occasion, in their draw against CH. Otherwise it’s a round to forget for the Police team who are struggling for form and some points.

Not totally unknown the kid was a superstar for St Anthony’s College, Katugasthota but to the surprise of many never got an opportunity in the national colours. Now, after a year without any rugby, young Maduwantha has stormed his way into becoming a pivotal player in the CH team. Avishka Lee is another who may have had a case but with Maduwantha’s match winning performances, he gets the nod as the most promising new player in the league.

ThePapare.com’s DRL round 1 Review: Players of the round, flops &...

Chandika Hathurusinghe; a story of hope, goose bumps & a grand...

Hathuru, Mister, you have your work cut out for you…