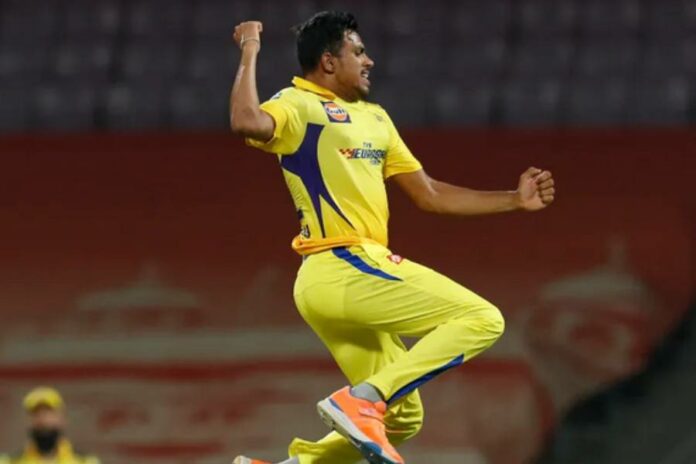 The Chennai Super Kings (CSK) registered their first victory in the TATA Indian Premier League (IPL) 2022 after defeating the Royal Challengers Bangalore (RCB) by 23 runs on Tuesday at the DY Patil Stadium in Navi Mumbai.

CSK reached a massive total of 216/4 thanks to Shivam Dube’s 95* and Robin Uthappa’s 88, before Maheesh Theekshana’s fantastic four-wicket haul helped CSK secure their first win of the season.

Chasing a gigantic target of 217, RCB lost an early wicket of skipper Faf du Plessis, who was caught in the deep as Maheesh Theekshana scalped maiden IPL wicket.

Glenn Maxwell scored a quick-fire 26 off 11 deliveries before Jadeja crashed a delivery into the stumps to end the right-handed batter’s innings.

Suyash Prabhudessai and Shahbaz Ahmed led RCB’s recovery and stitched a fine fifty partnership. Prabhudessai did the majority of the hitting and RCB were 110-4 with 8 overs to go.

Theekshana claimed his third wicket of the innings and brought an end to the partnership after Prabhudessai was bowled in the 13th over.

RCB required 86 from the final six overs. While Dinesh Karthik got a reprieve, Shahbaz Ahmed was bowled by Theekshana, who scalped his fourth wicket.

CSK skipper Jadeja got two wickets in the 16th over. While Hasaranga was caught in the deep, Akash Deep was caught by Rayudu, who took a terrific diving catch inside the circle.

Dinesh Karthik hammered 23 runs off the 17th over including two sixes and a four as RCB required 48 runs of the final three overs.

Jadeja took a sharp catch in the deep to bring an end to an outstanding cameo from Dinesh Karthik and CSK successfully defended the total in the end.

Earlier, CSK, who were put in to bat first, remained unchanged from the previous game.

Robin Uthappa smacked the first six of the innings and CSK were 35-1 at the end of powerplay.

Shivam Dube, the next batter in, started aggressively by smacking a four and six each. CSK were striking exactly at 6 runs an over, with 10 overs gone.

13 runs were conceded in the next over, bowled by Hasaranga, after Dube added a four and a six to the total.

Uthappa, on the other hand, clubbed three sixes in an over against Maxwell’s bowling as CSK switched gears. The right-handed batter then smacked a four followed by six to bring up his half-century.

Dube crossed his half-century with a four against Akash Deep while the hundred partnership was up for the third wicket as CSK were 145-2 with four overs to go.

Uthappa clobbered two sixes and a four against Siraj, who bowled the 17th over. CSK continued the fireworks after 24 runs came off the 18th over, bowled by Akash Deep.

Hasaranga scalped two wickets on consecutive deliveries in the penultimate over to dismiss Uthappa and CSK skipper Ravindra Jadeja.

Dube finished the innings with two giant sixes in the last over and remained unbeaten on 95 as CSK posted a commanding total of 216-4 in the first innings.