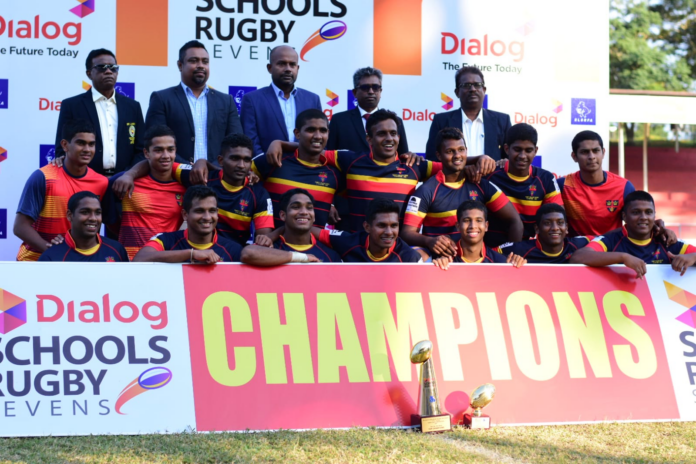 It was all set up for the perfect finale between the two best teams of the tournament. It was Kingswood who drew first blood through HKI Ishara, who ran all the way from his own half to score under the post. The hosts responded immediately, with Tevin Karunanayake fending off two tackles on his way over the whitewash. To finish off the half, Trinity took the lead through Thamuditha Dodanwatte, who used the numerical advantage after Kingswood Skipper D. Ekanayake was sinbinned for a deliberate knock on.

The second half was dominated by the hosts, as Kingswood succumbed to the pressure of the final. Ravidu Wickramasinghe extended the lead in the 9th minute with a converted try, after an initial break from Sehan Sirisoma. Trinity went on to add two more tries through Dodanwatte and Bawantha Dharmapala to finish the game strong.

Early on, Trinity College topped Group A, beating Sri Rahula College by 52 points to nil. They were then tested against Dharmaraja College whom they beat 32 points 19. The final group stage game was against their arch rivals St. Anthony’s College, which they won easily, 47 points to nil.

A hatrick of tries from Pasindu Liyanage helped Sri Rahula College seal the Shield Final, beating St. Sylvester’s College by 26 points to 10. Sri Rahula went to the break with 7-5 lead and in the second half, they managed to dominate the game with three more tries.

St Anthony’s College opened the scoring early on but Kavinda Punchihewa scored a converted try to level scores at lemons for Vidyartha College. St Anthony’s started off the second half with a try from Mohommad Zacky. However, two late tries, from Punchihewa and Chirantha Kaluarachchi helped Vidyartha secure the Bowl Championship.