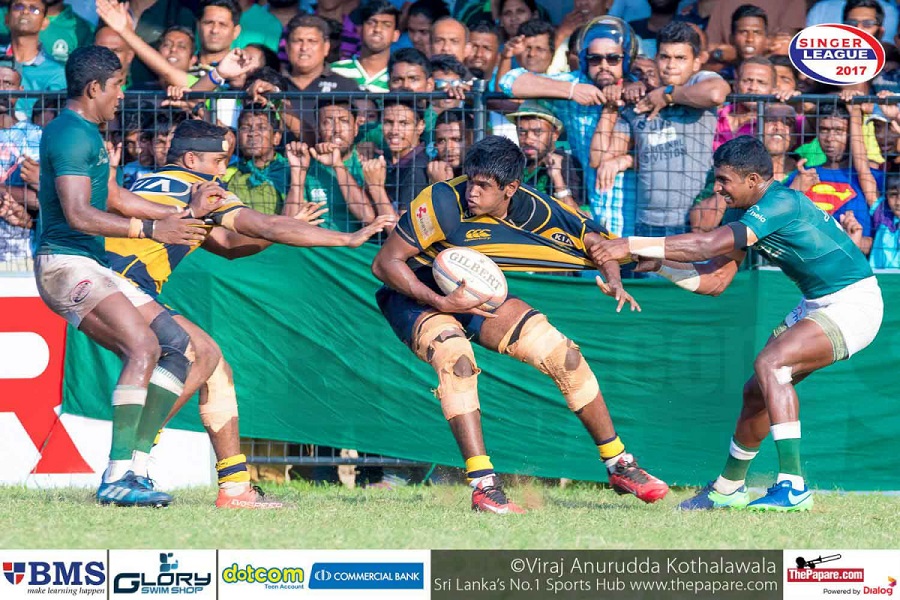 Last weekend produced two of the most entertaining encounters seen thus far in the school’s league. I was witness first hand to one of them – the Royal v Isipathana match. Whilst the quality of rugby seen in that game was a distance from being top draw, the topsy-turvy nature kept the mass of viewers present in suspense till the long blast of Referee Rohan Fernando’s whistle.

However, some of the scenes I took in were alarming, and made me aware of greater threat that seems to be constantly eroding the values that sport is supposed to inculcate in those involved. I will elaborate on this further on in the article, as this unfortunately seems a prevalent theme in the sport today.

Wesley hosted the dangerous Zahira on Friday at CR&FC. It was the latter who called the shots early on, with lightning fast Yusran Lanthra proving too hot to handle for the double blues defense. It was the Maradana school who led at half time 15-10. You would have thought that Coach Shamly Nawaz would have hoped for a bigger lead going into the break. However, his charges were the first out of the blocks in the second half, and the sprung to a 22-10 lead. One would have expected Zahira to close the game out from there. However, Wesley called on the same courage that served them against S.Thomas’. Two tries followed, and they were deadlocked at 29-29. They were somewhat fortunate to be awarded a penalty late in the game. But from a very acute angle Avantha Lee sent the ball through the uprights to keep them 3 points ahead. Zahira Captain Zahid Sinhawansa had an evening to forget. He was presented with two relatively straight-forward opportunities to tie the game. However, he seemed to have left his kicking boots at home. In the end all credit must be given to Wesley, for their resolve. After that initial blip against Trinity, they have managed to win all their other games to secure second place in their group.

On Saturday, I headed off to the much looked-forward to game between Royal and Isipathana, played for the Major Milroy Fernando trophy. Being on commentary duty I got to the grounds at around 3 pm. As I approached the grounds from the Independence pathway, there was a deafening uproar of heckling echoing from the stands. Some absolute rough stuff. My immediate thought was that the 2nd fifteen game was underway, and some over exuberant spectators were clearing their throats for the main event. However, upon getting into the ground I was shocked to see that it was the Under 14 game that was still going on.

The reality that dawned on me some time ago keeps being refreshed ever so often. Winning at any cost, and by any means seems to be the order of the day. And that seemingly applies to all age groups. What annoys me no end is the constant commentary and insults hurled by many an armchair critic. ‘off side!’, ‘work the line’…’take the kick’… being some of the favoured verbal’s to be hurled. What takes me to boiling point is when the insults and jeering get personal, targeting a player (or players) in particular. I am almost certain that those who engage in this sort of brash behaviour have never played the game at a seriously competitive level. Do these folk not realize that these are just mere kids out there on the park? Young boys who have dedicated countless hours for the honour of wearing their college colours. And try as they may, they are bound to fall short of expectation from time to time. And what’s wrong with that? Do we not see even international teams get it horribly wrong on certain days?

On this particular day, the Royal full back had an absolute howler. Dropped balls, missed tackles, you name it. The poor chap was absolutely crestfallen at the end of the game. It didn’t help him when I noticed someone walk up to him and have a ‘go’ at him after the game. The player was promptly whisked away by his team mates, but the damage had been done. I would like to re-iterate that this sort of thing is not an isolated incident. It happens in many a game today. Players are easy prey, given that spectators flock on to the grounds no sooner the game is called to an end. It’s during this time that Referees are invariably susceptible to abuse as well. We are simply seeing too much of this happening nowadays.

Today, the sport of rugby at school level, has taken a semi-professional form. Big money budgets accumulated through sponsorships, grueling training schedules, and a wide array of coaching and back up staff. Head Coach, Forwards Coach, Backs Coach, Kicking Coach, Physical Trainer – you name it, and most teams have them. This is generally complemented by various technical committees, that just add to the demands on the schoolboys under their charge. Then you take the scary amounts of supplements that are fed into the system. No doubt there are short term benefits to be gained, but at what cost? What about life afterwards, when the real game of life truly begins?

This apparently is the modern game. Whilst it has definitely raised the quality of rugby, one wonders whether it really offsets some of the ugly bi-products as captured in this article.

Parents are well entitled to ask the question – do I want my child to be subjected to this? Constant verbal abuse, with the threat of it spilling over into physical harm. Training morning, noon, and night, all year round but for a couple of months. Players virtually being sold and bought akin to IPL or Premiership style, sometimes just to play one season.  Would they really want their children to be a party to this sort of thing?

Make no mistake folks. We’re floating off into troubled waters. The governing body needs to wake up from its slumber, whilst all schools involved also have a significant part to play. The interest and welfare of our students need to be protected at all costs. Rugby has taught me so much in life, and I hope that all those playing the sport today extract the same import.

On reflection, I am proud to have played the game in an era where nutritional supplements were confined to a milk packet after practice. When our whoever coached us, also prepared us for greater battles to come outside the pitch. At a time where all players from all schools wore the same type of jersey made by Bernards. When half time ‘lemons’ actually consisted of lemons. Lemons and water. Wins were joyful, losses were hurtful, but a lesson learnt in each outcome.

The first round of games have all but come to an end. Trinity remain the only unbeaten side – the ones to beat. At the end of this weekend, a three-week sabbatical is to follow before the second round begins. I hope this article will go some small distance in reminding us all, of what the main objective to be gained from schoolboy rugby.

Winning trophies is glamourous, especially the traditional ones. But remember, trophies will be nothing but steel and wood, if the essence of sportsmanship, comradery, and above all discipline is lost!