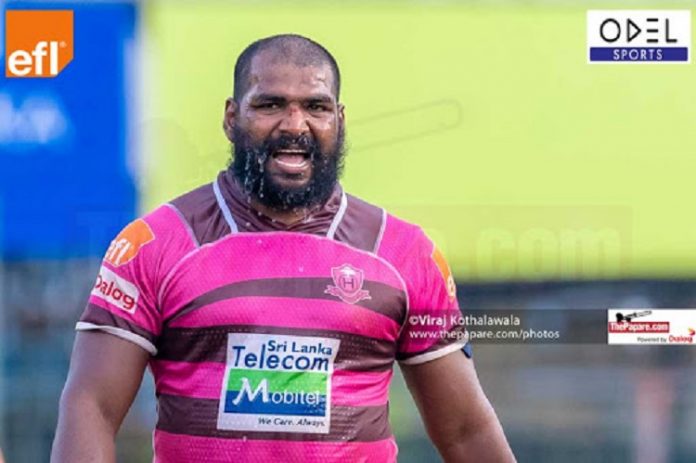 In the pre-season to the Dialog Rugby League, one club suffered the most amount of transfers out in a single rugby season.

Having spent three seasons in 2nd position of the league, Havelock gifted it away to Navy last season and had to be content with a 3rd place finish.

Adding insult to injury, with just a few weeks to go for the kick-off of the league, veteran hooker Prasad Madusanka transferred himself out too.

It was at that vulnerable period that the rest of the players took a stance for themselves, deciding that they were going to stay and fight the battle no matter lay ahead.

There was no expectations surrounding the club with the focus shifting to Colombo 7 where two teams were busy in the transfer market, recruiting some big names.

Five weeks into the Dialog Rugby League 2018/19, the Colombo 7 clubs have settled (for the time being at least) at the bottom end of the table while Havelock Sports Club, quite unexpectedly, sits on par with the defending league champions Kandy Sports Club, UNDEFEATED.

Concluding the game at Longdon Place last week, CR & FC were no match for the rampaging forwards in pink. A Mathysz trophy clash that was expected go in favour of the hosts, saw the complete opposite as Havies steamrolled CR & FC.

In five weeks of action, Havelock Sports Club have won 5 out of 5, scored 23 tries and collected all five of their bonus points.

But how did an average, new-look team’s fortunes change so dramatically over a couple of months?

When coach Sanath Martis took over the challenge of starting afresh in the club rugby arena with a team like the Havies, it was clear that it would be a tester for the veteran. Until then, in recent times, he had cherished remarkable success in the schools’ arena with St. Peter’s and Royal College.

The unique value factor that Martis brings to the table is his ability to build teams. This is something that can be seen with every team that he had coached. From the St. Anne’s College team in the 1990’s to St. Peter’s and Royal, he has built champion outfits.

So, what do you do when you are given irregular shapes in a puzzle with a number missing and the pieces remaining seemingly don’t fit together as expected?

For the Havies, the challenge was to take the best of what they had and use the resources they could muster up from the transfer window.

In the midst of drama, a few of the Havelock strongholds held their ground. Veteran campaigner Dushmantha Priyadarshana opted to stay along with the other senior men in the team.

The team had Liston Flatney, Sharo Fernando and Senal Deelaka who were their strength in the pack and the team was built around those players. Former Royal hooker Azmeer Fajudeen too evolved into taking up a bigger role at Havelock’s.

A team that was given zero chances by the critics pre-season have become a feared opposition in the league in just five weeks.

The Havelock Sports Club forwards have set a benchmark in the Dialog Rugby League in terms of mauling and in the breakdowns. With the likes of Sharo Fernando and Madushan strengthening the second row, the Pink jerseys have become the undisputable kings of the scrum.

“Havelocks will play a forwards dominant game this season” was what the Havies Captain Niroshan Fernando had to say about his team’s strategy and how they’ve come so far in the 2018/19 season.

The dominance of the forwards at Havelock has reflected in their scoring. In their five outings, they have scored 20 tries in total, out of which 16 have come from the forwards, that’s 80% of the total.

Last weekend’s victory that saw Havelock Sports Club steamroll the celebrated CR & FC side was a perfect advertisement of what’s to come from the men in pink.

With two weeks to go in round one of the League, the real tester for the side will be when they make it to Kandy to face the defending champions. Over the years, the Kandy-Havelock clash has been an encounter that the entire rugby fraternity has looked forward to and this year will be no different.

However, this year there will be different facet to the game. Two teams where the backline has dominated over the years, this year the encounter will be one that will be won or lost by the forwards.

The last time the side came to Kandy was during the final week of the league 2017/18 and Kandy were fortunate to come away with the win 38-22.

A fitting farewell for Fazil Marija last year was saved by the full-time whistle as the Havies forwards mauled the entire of the 2nd half, having trailed 22-0 at half time.

A hat-trick of tries from Fazil Marija and one from Gayan Weeraratne ensured that Kandy had themselves an unbeaten season. But this year, is a whole new challenge.

There is no Marija or Weeraratne this year. A whole new challenge for the Kandy and based on form, the upcountry kings will have to look to Shehan Pathirana and Buwaneka Udangamuwa for inspiration.

What Sanath Martis’ Havelock Sports Club bears testament for is the fact that you do not need star players or big names in your team to win matches. With a committed team that gives nothing short of their 100%, anything is possible.

Havelock have with themselves a gift that only a few teams in this Dialog Rugby League possess. Other clubs have big players; but Havelock Sports Club have themselves a team.

The year of promise: A look back at track & field...

ThePapare’s DRL Team of the 1st Round