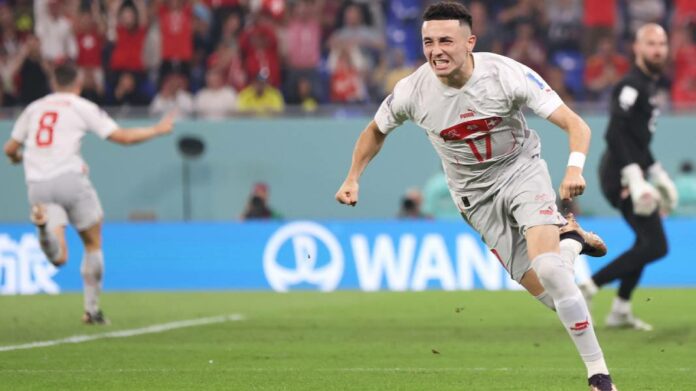 Switzerland emerged on top from a topsy-turvy, highly charged encounter with Serbia to book a FIFA World Cup™ last-16 date with Portugal on Tuesday.

A game that began at a cracking pace and never let up swung one way then the other, Switzerland tossing away a one-goal lead, only to recover for their second straight win. Vanja Milinkovic-Savic saved from Breel Embolo and Granit Xhaka as the Swiss poured forward in the first minute.

Serbia’s response came in the form of an Andrija Zivkovic shot from distance that slammed the post. But Switzerland led when Djibril Sow collected a weak clearance from Strahinja Pavlovic to calmly feed Xherdan Shaqiri for the forward to score in a third consecutive World Cup.

Serbia stormed back from trailing Cameroon on Monday and they repeated the trick here. Aleksandar Mitrovic met Dusan Tadic’s delivery with a brilliant header that flew beyond Gregor Kobel, the goalkeeper who received a late summons, with regular No1 Yann Sommer laid low by illness.

Kobel was beaten again eight minutes later, Dusan Vlahovic profiting when the ubiquitous Tadic’s eye-of-the-needle pass was deflected into the striker’s path for a lashed finish into the bottom corner.

Embolo levelled 60 seconds before half-time, steering in from close range after Switzerland got down the Serbia left for Silvan Widmer to cross along floor. Nottingham Forest midfielder Freuler fastened onto Ruben Vargas’s magnificent lay-off on the volley from Shaqiri’s pitching-wedge pass to slide a cute effort past Milinkovic-Savic three minutes after half-time.

How many more goals was this barmy game going to serve up? Not many viewers would have predicted we’d seen the last of them. The same can be said of Serbia in this competition. But the Swiss are hanging around for more.

Switzerland might have counted themselves unfortunate when their one-goal lead was wiped out in quick time. Murat Yakin’s team, so parsimonious in their opening two fixtures, were never going to lapse into carelessness and make the same mistake twice.

Freuler’s excellent, disguised finish to crown a fabulous sequence of passes, therefore, was pivotal. Midfielder Vargas (below), with his back to goal, skilfully back-heeled Shaqiri’s flighted ball into the path of Freuler. The pass doubled up as an invitation to shoot and Freuler gratefully accepted. Rather than put his boot through the ball, the 30-year-old performed a barely perceptible feint, tricking Milinkovic-Savic into diving the wrong way as the shot travelled inside the keeper’s left post.

The Serbians needed two goals inside 42 minutes to progress. For an idea of the scale of that challenge, remember Brazil’s first-choice team required 83 minutes to crack the Swiss resistance eight days ago. The game was up for Serbia, who surrendered a two-goal lead to draw their second match with Cameroon and had another advantage conclusively wrenched from their grasp when Freuler buried his strike.

Xherdan Sahqiri is keeping company with Cristiano Ronaldo and Lionel Messi among the three players who have scored at the 2014, 2018 and 2022 World Cups.

Remo Freuler is the first Nottingham Forest player to score at a FIFA World Cup since Pierre van Hooijdonk netted for the Netherlands against Korea Republic at France 98.

Murat Yakin, Switzerland coach: “My team said they wanted to make history. We were happy with this result and the way we played. We deserved to win.”

A captain’s performance from Granit Xhaka! 💪

He earns your votes for @Budweiser Player of the Match and guides Switzerland to the #FIFAWorldCup round of 16 for the third time in a row!