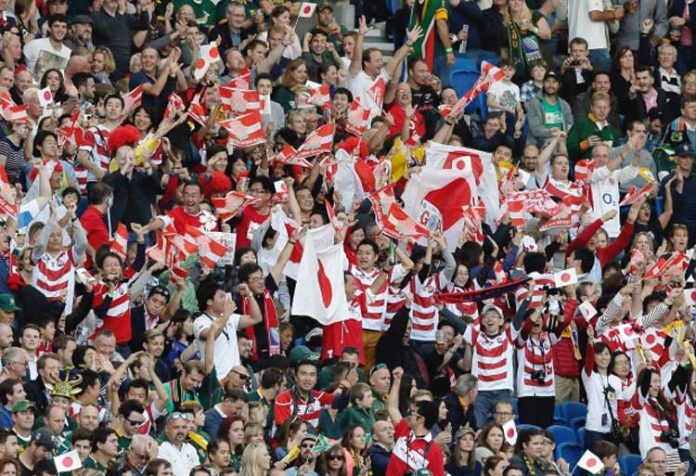 A recent survey done by Nielsen Sports has revealed that the game of Rugby continues to grow a big following, since its inclusion into the Olympic Games with 1 in 9 people being rugby followers.

Results according to a World Cup survey show the increase in the number of Rugby fans and that the number is continuing to increase.

As the Rugby World Cup trophy 2019 makes it way to India, World Rugby announced a staggering number of 25.7 million rugby fans in India and stating “a vibrant, growing sport that is increasingly broadening its global appeal.”

Furthermore, according to the governing body of the sport: “Rugby has close to 800 million followers around the world. Meanwhile more than 338 million consider themselves fans, with China, India and the USA alone consisting almost 33% of the population, according to the largest-ever market research into fan trends and perceptions conducted by World Rugby.

This paints a vibrant picture stating the fact that one in every nine people on the planet consider themselves a ‘rugby followers’.

Rugby’s global participation is experiencing strong growth with 9.1 million men, women and children (registered as casual participants) regularly playing the sport as the growth is driven by the immersing rugby markets. The research which was across 88 markets, reflects participation trends, with a significant number increasing following the add-on of the sport to the Olympics:

The statement adds: “With the Rugby Sevens World Cup 2018 in San Francisco where more than 100,000 fans attended, the research shows that emerging market fans growth has increase due to the ease in which the is accessible due to its short format. The research also displayed the immediate effect the debut of the Olympics having following inclusion in 2016 saw around 16.8 million new fans grow across the six markets.

“Sevens is the most sought after format and World Rugby successfully uses it to convert new fans in the digital space, as its quick action, short format and easy-to-understand nature made its social media resonate with youngsters and casual sports fans. It also generated record video views and engagement rates.”

According to the survey:

This hike displays World Ruby’s strategic plan to make sure the sport grows by attracting new audiences, remaining relevant to its current fans as they strive to provide a mass quantity of quality data to shape fan-engagement strategy benchmark performance via growth and perception trends.

World Rugby Chairman Bill Beaumont mentioned: “World Rugby is thankful for this research, this displays how the sport continues to attract new fans, young and old globally. This information will help our decision making in a strategic manner. Our unions are making sure the attractiveness of the game increases as we build fan-engagement further.”

Speaking from India during the Rugby World Cup 2019 trophy tour, World Rugby Chief Executive Officer Brett Gosper said: World Rugby is committed to making sure Rugby is a thriving, growing, inclusive game which can be accessed by all and this study, demonstrates phenomenal fan-growth, which displays a sport that is effective in attracting a new, younger audience in non-traditional rugby nations, despite huge competition for eyeballs and attention.

“The research also demonstrates that rugby has significant growth potential in both traditional and non-traditional markets and is increasingly attracting a younger audience. We will use the insight to guide our decision-making and approach to growing fans and participants in rugby globally.”

World Rugby’s main motivator for fans who are currently not interested in rugby is to make the sport understandable and international matches accessible.

These are the areas World Rugby and its unions constantly address and review through councils, federations and Executive Committees.

With sevens rugby on the rise in Sri Lanka the fan base has continued its rise as more and more fans get attracted to follow the short format. Not only in the country but with the Tuskers performing on the world stage, the number is bound to rise as Sri Lanka Rugby aims to qualify for the Rugby Sevens World Cup in the years to come.