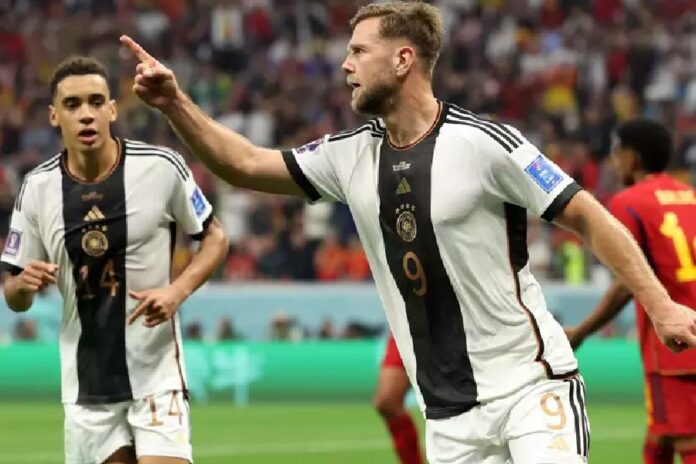 Spain pegged back after Morata opener

Substitute Niclas Fullkrug reignited Germany’s World Cup challenge with a scorching late equalising strike to claim a precious point against Spain at a rapt Al Bayt Stadium. Spain appeared on course for a second successive victory and a huge step towards the last 16 after Alvaro Morata came off the bench to convert a 62nd-minute Jordi Alba cross. But Fullkrug, who made a goalscoring Germany debut against Oman only 11 days ago, crashed an unstoppable strike past Unai Simon to earn a fully-merited point for Hansi Flick’s team.

Spain created the better of the early openings, Dani Olmo thumping the bar, via a vital touch from Manuel Neuer, and Alba rippling the side netting with an effort from distance. Antonio Rudiger thought he’d scored six minutes before the break but the Germany centre-back’s celebrations were halted by an offside flag.

Spain broke through when the predatory Morata darted in front of Niklas Skula at the front post to apply a decisive touch to Alba’s fizzing cross. Marco Asensio skied an attempt as Spain tried to put the game to bed. And Germany responded, Jamal Musiala forcing Simon into a fine one-handed stop, before Fullkrug beat the Spain goalkeeper with an unstoppable drive.

Coach Flick watched Luis Enrique introduce Morata to telling effect and responded with a notable play of his own. The Germany coach didn’t pursue the obvious route in pursuit of an equaliser to revive his team’s World Cup hopes, either. Off came Thomas Muller, scorer of 10 goals in four World Cups and a champion in 2014. In the Bayern Munich workhorse’s place came Fullkrug, nearing his 30th birthday and making only his third national team appearance following a debut this month.

It was a huge call from Flick, one he’d have likely been reminded about for years to come in the event of a defeat. Fullkrug wasn’t quite as quick to the party as Morata, who struck eight minutes after his introduction.

But the Werder Bremen player had been on the field only 13 minutes when he smashed a ferocious shot that defeated Simon for the first time in this World Cup. Validation for Flick. Germany live to fight another day.

Niclas Fullkrug is the first Germany substitute to score in a World Cup match since Mario Gotze stepped off the bench to win the 2014 final against Argentina.

Spain coach Luis Enrique: “If after the [World Cup] draw we’d been told that after the first two matches we’d be leaders of the group and depend only on ourselves, I would have signed for that. A draw against Japan [in final group game] is enough, but we’re not going to speculate. “Yes, it’s a pity, the result, but we have to be happy because we are leaders in this group.”

Germany coach Hansi Flick: “The team maintained a great level. I am very satisfied with the mentality and the team’s work today. This was a match on a high level. Those are things we want to see from this team, but this was only a first step. We want to see [more in the] next match [against Costa Rica] and create the conditions to go through.”

Déjà vu? 👀 Alvaro Morata steps up again from the bench to secure Spain a 1-1 draw with Germany.💥

Has your @Budweiser Player of the Match done enough to start in their 3rd & final game of the group stages? 🤔