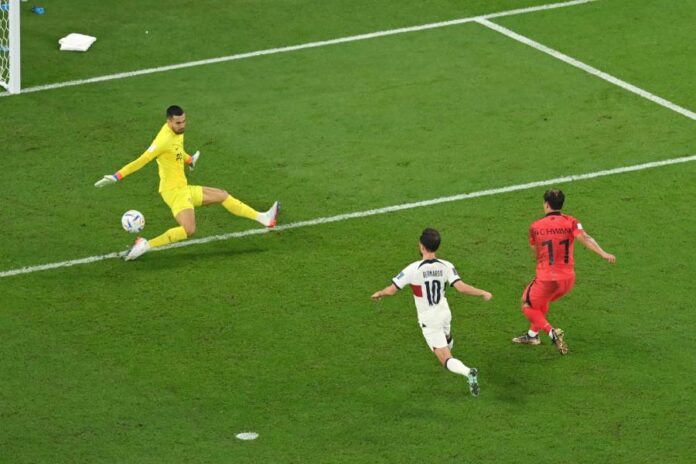 Korea Republic will play in the round of 16 at Qatar 2022 after Hwang Heechan’s stoppage-time strike earned a 2-1 win over Portugal.
Korea Republic v Portugal | Group H | FIFA World Cup Qatar 2022™ | Highlights
Watch the highlights from the match between Korea Republic and Portugal played at Education City Stadium, Al Rayyan on Friday, 02 December 2022.

Goalscorers: Kim Younggwon (27′), Hwang Heechan (90+1′); Ricardo Horta (5′) A stoppage-time Hwang Heechan strike has taken Korea Republic from the bottom of Group H into second place and on to the round of 16.

The dramatic, late goal, in a FIFA World Cup™ full of them, eliminated Uruguay, who had been poised to join already-qualified Portugal in the knockout stage. Paulo Bento’s side progress by virtue of having scored four goals to the South Americans’ two, while Cristiano Ronaldo and Co – even in defeat – go through as group winners.

Korean fans could barely have imagined that outcome when Portugal took a fifth-minute lead in this match, with Ricardo Horta crashing home a superb first-time finish.

They struck back in comical fashion midway through the half, however, when Cristiano Ronaldo misjudged a cross and allowed the ball to bounce off his back. In doing so, the Portugal captain became an unwilling assist-provider, teeing up Kim Younggwon for a close-range effort that the defender smashed home with venom.

Both sides had their chances in an end-to-end second half but it was the Taegeuk Warriors who showed most attacking intent. Their reward came in the first minute of additional time and, while Portugal still qualify as group winners, this was a day that belonged to the Koreans.

How could it be anything else? Son Heungmin had been full of energy throughout the second half but his attempts to break through the Portugal defence had become increasingly frantic.

Somehow, though, as the clock ticked past the 90-minute mark, the Korea Republic talisman found the composure to stop – surrounded by Portuguese defenders – and slip a delicate, inch-perfect pass through for Hwang. The timing of the scorer’s run was equally flawless, while his first-time right-foot shot left Diogo Costa without a hope.

Stat of the match

Korea Republic have cemented their reputation as late-goal specialists.

4/7 – Four of South Korea’s last seven goals at the World Cup have been scored in the 90th minute or later of the second half. Drama. pic.twitter.com/oo6Hlna3xP

Son Heungmin, Korea Republic forward: “We all knew that this was going to be a 90-minute game, so even after we conceded early our strong will and belief that we can win gave us the strength to turn things around.” “It was especially important that we went into half-time after making it 1-1. That gave us a little bit more belief and ultimately gave us the strength that we needed. We believed in the very little possibility that we had, but gave our maximum effort to make it happen. That’s how we were able to achieve this result. I want to say thank you to my team-mates. I’m so proud of them.”