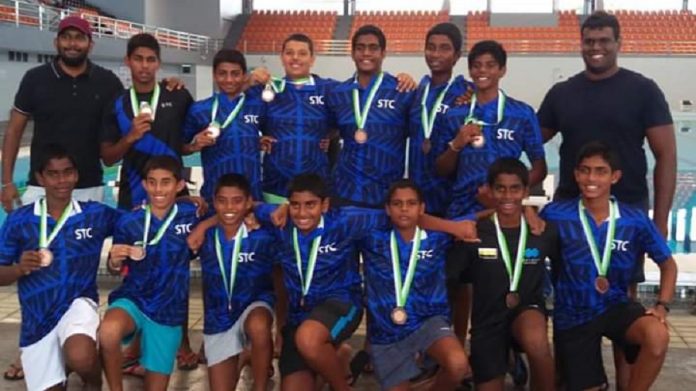 After some healthy competition, the young Thomians were placed 3rd in the points table, beating a few Malaysian teams in the process.

This event was conducted under the Men’s, Women’s and Under 15 segments. The S. Thomas’ juniors didn’t have the best of starts in the tournament as they lost to Malaka State 15 goals to 8 in their very first game. However, the team got their act together as they shifted into attack mode in the second game to beat Perak State 13 goals to 8.

The School by the Sea, which is well known to produce some really exciting Waterpolo in the schools arena, breezed past the Kuala Lumpur State team by 14 goals to 6. The Thomians were in a really good position to claim the top spot, succumbed to a strong Negeri Sembilan State team, who scored double of what the Thomians did. Despite the scores reading in favour of the Malaysian team, the young Thomians were placed third overall in the points table, ensuring them a hard-earned Bronze Medal.

This tournament has been running for 60 long years and this is the first time the School by the Sea were placed at such a grand event. S. Thomas’ College and Royal College have been the front runners of the sport in Sri Lanka, with the annual Royal-Thomian encounter being played for 26 years. This Under 15 team beat the Royalists in their traditional Hayman encounter by a record breaking 30 points to 6 (the aggregate of both legs).

The waterpolo advisory board of the school, alongside the Warden of STC and coaches rewarded the team for their achievement in the Hayman junior match with this tour to Malaysia, one that has given the boys some valuable exposure and experience.