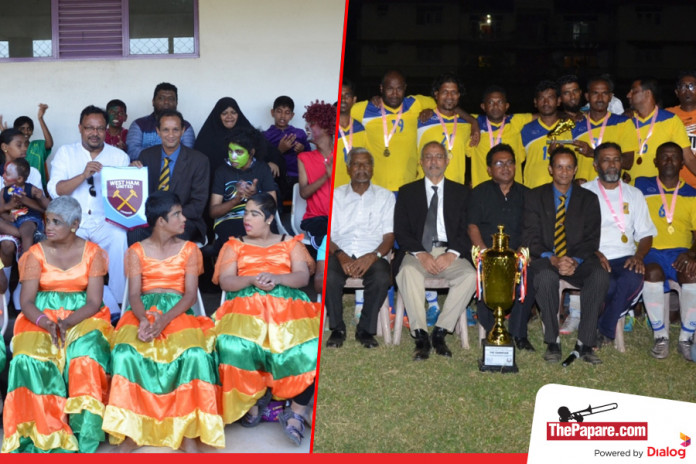 But the real ‘Stars’ were the players of all nine teams who took part in this tournament for a worthy cause of contributing towards the needy children of island.

It really touched the hearts of the small crowd gathered at the City League Grounds when a group of needy children from Wellampitiya Ash Shifa (Children with Special Needs) and Prithipura Children’s Home displayed their skills of dance and extending their appreciation to the untiring efforts of Football for Peace Sri Lanka headed by Muheed Jeeran for organizing such an event to help the underpriviledged.

London FC, fielding two teams, paid an entry fee of Rs.50,000 and the other seven teams entered the fray with Rs.25,000 as entry fees.

All in all Rs. 220,000 was collected as entry fees with a few donations from well-wishers and the Champions Super Star Veterans, 1st runner-up Kolkata United Veterans, 2nd runner-up Java Lane Veterans and the 3rd runner-up Maligawatte Veterans all fulfillig their promises by donating their prize money. It not only showed their sportsmanship but also their humanity.

The recipients of the donations were the Childrens’ ward of the Cancer Hospital Maharagama (Rs.100,000), The Ceylon School for Deaf and Blind Rathmalana (Rs. 40,000), Ash-Shifaa Children with Special Needs, Wellampitya (Rs. 40,000) and Prithipura Children’s Home (Rs. 40,000)

Coming back to the game, the final of the Peace and Charity International Tournament Super Star Veterans beat United Veterans Kolkota FC from India by 5 goals to 1. But both the winner and loser expressed that they had played for a worthy cause and the result does not matter at all.

The Super Star Veterans had ten former National players in their ranks including three players who still play for reputed clubs taking part in the Champions League and FA Cup tournaments and they were too strong for the Indian team who had to play five matches in a single day.

High Commissioner for Pakistan in Sri Lanka Rt. Major General Shakeel Hussain graced the occasion and gave away the main trophy. Zakir Khan, Special Ambassador of West Ham United FC from England give away the runners up trophy,  Thilak Peiris, President of Soccer Masters Association, Anthony Balendra, Secretary of FFSL and Proprietor of Top Printers Sameer Yunous were the guests of honour. Colombo Veterans’ Puvendran failed to attend the ceremony due to his visit out of Colombo for an official matter but he generously pledged to donate Rs 50,000 to this worthy cause.

Muheed stated, “Though we lacked on getting big sponsorship for this project, we managed to prove that we are capable of running any uphill task. I promise to make the next International Veterans Tournament much bigger by inviting more countries especially from Europe to support worthy causes like this.”

Runner-up team United Veterans from Kolkota visited the Ceylon Deaf and Blind School and personally handed over their donation to those needy children before heading off to India.