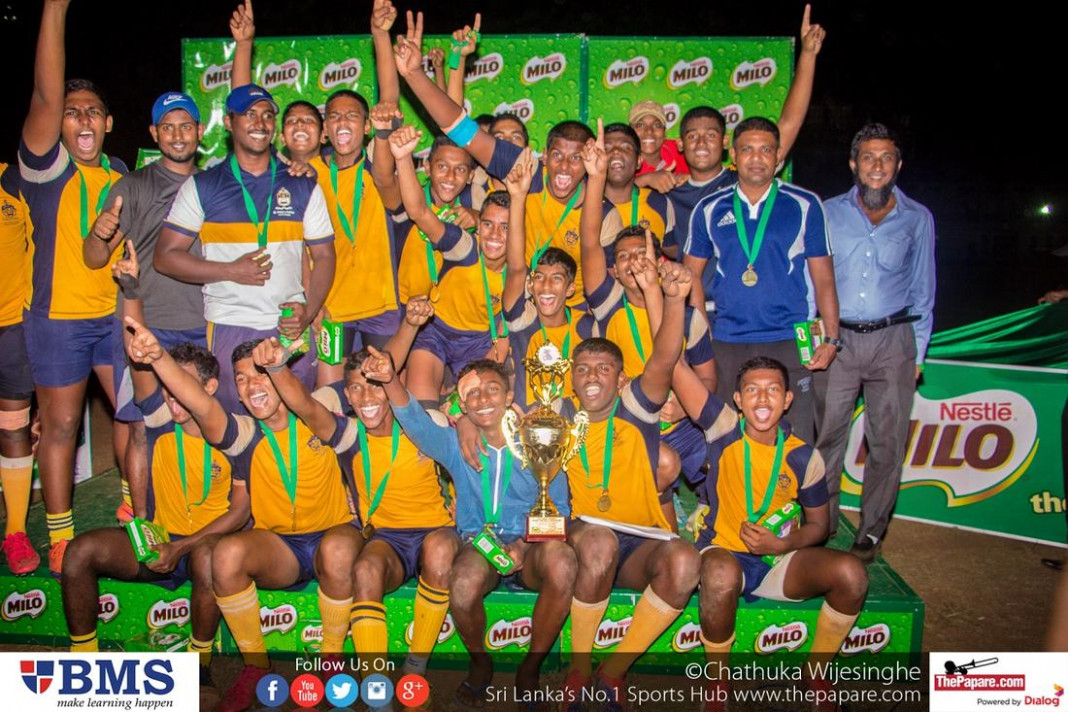 Inter schools ‘Milo’ Under 16 ‘Twelve’ – A – Side Rugby Tournament 2016 which was scheduled kicked off a little later than the scheduled time. The secondday featured the knockout stages of the tournament with 8 teams competing for the Cup and Plate while another 8 competed for the Shield.

St.Peters emerged victorious with a fine performance throughout the tournament of two days. They used their runners to score with mere pace only, running around defenders and were worthy winners of the cup.

The day’s play kicked off with the Cup quarter-finals, St.Anthony’s the defending champions took on the St. Peters team who thrashed them 29 points to none with ease. These 29 points involved 5 tries and two conversions and all 5 tries coming from their backline.

The second quarter final featured Kingswood taking on the Trinity. Trinity won by a margin of a penalty which was after a good 20 minutes of play, the score line read 21 – 18.

Wesley College lost to Royal College Colombo in the third quarter final 20 points to 5. Royal had superior physical strength and burst through the Wesley defense.

The favorites on paper Isipathana went down to Science College Mount Lavinia by quite big gap of 24 points.

At the end of the first quarter of the day St.Peters, Trinity, Science and Royal commenced to the Cup semi-finals while the losers Isipathana, Kingswood, Wesley and St.Anthony’s still had hopes of the Plate even after losing early in the morning.

The all-important Cup semi-finals took place with St.Peters taking on Trinity in the first match while Royal took on science in the second semi-final. St. Peters the on-form team on day one put forward another solid performance. They accumulated 17 to their score while Trinity failed to score a single point show casing the quality of the team St.Peters had with them. The second semi-final featured Royal and Science this too was a carbon copy of what happened in the first semi-final, Royal got 17 points to their name while Science College got none.

Both the finalists Royal and St.Peters had put solid performances under their belts in the early part of the tournament and now they only had one hurdle to cross to become the champions. The game started at around 6.30pm in the evening by which time it was pretty dark and the players couldn’t see the ball very clearly, however with the lights available the game kicked off.

St.Peters had the upper hand in the opening minutes of the game which they converted into points. At half time these were the only points scored as the score read 5-0 in favor of St.Peters. As soon as the second half started Peters over the line again, at this point of time the light was pretty bad and the players struggled to see the ball so the referee decided to call the game off and award St.Peters the trophy of the Under 16 Milo championship.

The plate semi-finals saw Kingswood taking on the defending champions, St. Anthony’s in the first of the two semi-finals they were defeated 24 points to 11 points.

Wesley came up next with a complete performance against Isipathana in the second semi-final of the plate championship to win it with a considerable margin.Isipathana failed again to deliver when it mattered. Wesley scored 17 while the Isipathana added none to their tally.

Kingswood and Wesley played it out for the Plate championship in the final of that category next which was played just before the Cup final. Wesley led 12-07 with 1 minute to go but some brilliant play by the Kingswood captain saw them through as he slotted the conversion of his own try to win his school the Plate championship. (14 -12.)

The Bowl quarter finals saw C.W.W.Kannangara, Dharmaraja, D.S.Senanayake and St. Josephs qualifying for the semi finals after defeating Vidyartha (22-14), St.Benedicts (10-07), Piliyandala MV (22-00) and Zahira (10-00) respectively. St. Josephs possessed some good players and some players who participated in the U18 team competitions as well. They eventually went on to defeat Dharmaraja 24-12 and D.S.Senanayake 19-00 to win the Bowl Championship of the tournament.

D.S.Senanayake became the runners up of the Bowl championship by winning their semi final that was played against C.W.W.Kannangara 10-05.

The shield quarters was played next where Thurstan, Ananda, Nalanda, and St. Sylvester’s saw through to the finals defeating the 4 teams that had not won a single game in the tournament that was held namely Maliyadeva , Royal Panadura, Mahanama and Lalith Athulathmudali with somewhat easily. The semi-finals were won by Ananda and Nalanda defeating Thurstan and Sylvester’s 25-00 and 17-5 respectively setting up a final between Ananda and Nalanda for the shield. Ananda went on to win the shield by defeating their rival school convincingly by a margin of 20 – 00