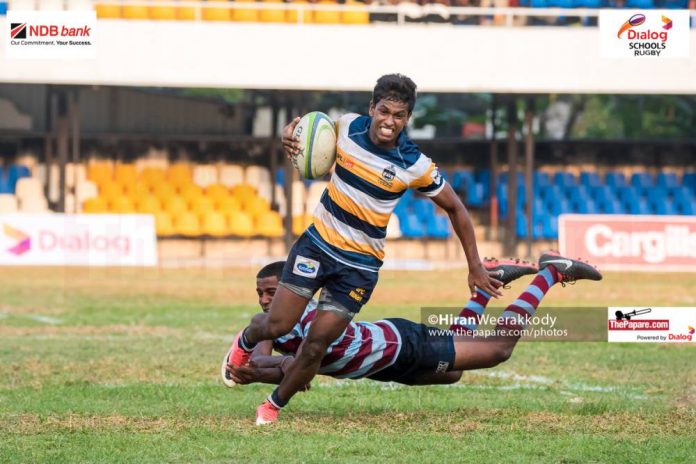 Dharmaraja College proved no match for St. Peter’s College in Bambalapitiya going down 50-14 in a decidedly one-sided contest to kick off the 2020 Dialog Schools Rugby League.

Entering the fray as favorites, the Peterites posted a formidable outfit with the likes of Thenuka Nanayakkara at first-five while skipper Yohan Fernando slotted in at number.08.

Meanwhile, Dharmaraja came in with an inexperienced XV with promising youngsters Sawmya Wijesiri slotting in at Fullback while captain Vishal Ranaweerasinghe taking the outside center role.

St. Peter’s stamped their mark and the minor Rajans outfit was under the pump from the onset.

It took the hosts just 6-minutes to break the deadlock as early tries from prop forward Akalanka Perera and winger Ishan Fernando set the tone as the home team took the game by the scruff of its neck.

Senura Perera scored the third try of the game as both front row forwards had their name on the scoresheet early as the flood gates were about to be broken open.

The visitors managed to get a foothold on proceedings and eventually ended the move with a try from eighth-man Banula Vithanage as the biggest forward of the Rajans outfit crashed over for their first.

Fullback Sawmya made no mistake with the conversion as the visitors pulled back 7 on the scoresheet, however, proceedings on-field did not take a very different outlook. (SPC 19-07 DRCK)

Visiting inside-center Thenuka Wickramasinghe paid the price as his team strayed offside on multiple occasions and things went from bad to worse following the Rajans having to play with 14-men.

The hosts struck on the back of the advantage as the bonus point try was secured before the end of the first half of the game, further demoralizing the visitors.

Malinga Sheshan was the beneficiary as the whole front row had now registered their name on the scoresheet, and Peters all but in cruise control. Nanayakkara added the extras as he went into the sheds with an unblemished record off the tee.

The visitors began the second half winning two little battles within the war, however, their evening continued on the downward trend as try-scorer Banula Vithanage saw yellow for a high shot.

This paved the way for Ishan Fernando as the winger who registered his second of the evening, putting the game to bed early on in the second half. Nanayakkara failed with the extras as his 100% record was thrown out of the window. (SPC 31-07 DRCK)

The visitor’s pulled one back courtesy nippy halfback Tharanga Dileepa. The no. 9 snuck his way through the hosts’ defense, wriggling his way to the try line. Wijesiri added the conversion as some respectability was to be seen on the scoreboard. (SPC 31-14 DRCK)

Dharmaraja’s discipline went out of the window as proceedings did not go the way they hoped it would and this only let the visitors put more points between the two sides.

Center Yashoda Mendis added the finishing touch to an eye-catching move which saw 6-of the 8 home forwards spread the ball wide paving the way for Mendis to dive over.

No sooner, Shehan Natalian caught the visitors off-guard on the blindside, picking and running home to score untouched as the hosts were scoring for fun.

Ishan Fernando added the cherry on top as the winger scored his hat-trick as the home team ran riot putting on 50 onboard against a powerless Dharmaraja outfit.