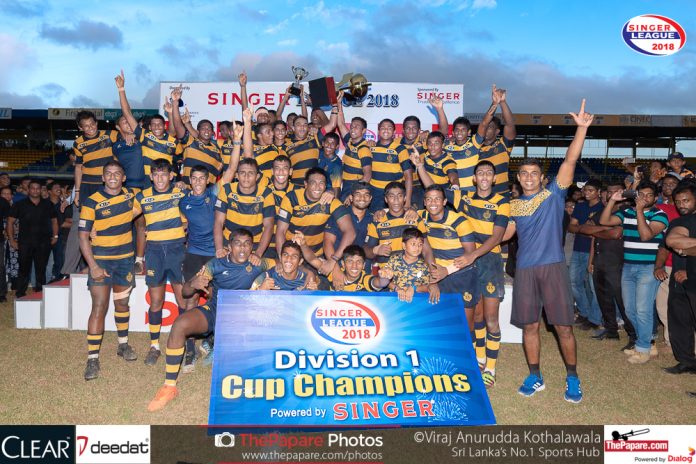 Painting the Singer Schools ‘A’ division Rugby League Blue, Gold and Blue, it was indeed a ‘Royal’ league as defending champions Royal College remained unbeaten to clinch the most coveted title displaying their commanding superiority. They cut loose in the final quarter and cruised to a 32 points to 13 victory over challengers, St.Peter’s College in their final game that concluded at the Royal Sports Complex this evening. Royal collected their points from 5 Tries, 2 Conversions and a Penalty while St.Peter’s responded with a Try, a Conversion and 2 Penalties. The win ensured Royal a 2nd consecutive league title, while the B.C Angie Trophy remained at Reid Avenue for another year as well.

In stark contrast to how the weather had been the previous week, it was a bright sunny day at the complex that invited both teams to showcase some open fast, running rugby. St.Peter’s College did just that settling in quicker into the game and testing the Royal defense early on. But the defending champions seemed to have picked up from where they left off against Isipathana as the Peterites struggled to make too much of an impact in the game as Royals defensive lines held staunch. The Peterite efforts however did win them an early penalty in the 6th minute which full-back Shehan Liyanapathirana fired across from 40 meters out. (RC 00 – SPC 03)

Top Try and Point Scorers of the Schools Rugby League 2018

St.Peter’s kept questioning the Royal defense but there was no chink in the Royal armour, as they countered the threat with some effective tackling and made the Peterites toil in search of territory. After sustaining the early pressure from the visitors, just a simple mistake was enough to have the Royalists punish them with a clinical effort. Having won a penalty just inside their own half, the ball was kicked out to touch and then followed the very ‘Royal’ lethal roller. The home eight rumbled their way through the opposition ranks and Hooker Ifham Fareed grounded the ball over the line. Full back Dulan Gunawardane’s conversion attempt looked straight as an arrow as it bisected the uprights putting his team ahead. (RC 07 – SPC 03).

The visitors had another penalty awarded in the 30th minute but on this occasion Liyanapathirana could not find the target. Instead it was the hosts who added further cushioning to their lead through their scrum half Mubeen Faleel who scored the 2nd try of the game. Royals skipper Sabith Feroze was brought down just meters away from the try line by some last gasp Peterite defending but Mubeen Faleel was the first to react as he picked up the ball off the ensuing ruck and sneaked through in between a couple of defenders to score. Dulan was unsuccessful with the conversion but his team was ahead by 10 points as the two teams went into the sheds for the half time break.

St.Peter’s once again seemed to have started the better from the two teams as they kept the Royal defense busy with some telling breaks that won them valuable yards as they surged ahead. This time they were able to get maximum points as they reduced the lead to a mere two points in the 42nd minute through Prop forward Abdullah Faiz, who powered his way through under the posts from close range. Liyanapathirana put over the easy extras and the Royalists knew they had a game on their hands. But as champion teams often do, Royal’s response was swift and effective. A poor clearance kick by Liyanapathirana saw his team concede a line out inside their own 22’. There was no stopping the Royal eight as they steamrolled their way into the try line and once again it was Ifham Fareed who got his name on the score sheet for a second time in the evening. Dulan’s conversion attempt was off target but the Royalists pulled ahead by 5 points. (RC 17 – SPC 10)

The Peterites came back at the Royal hard and their pressure won them yet another penalty when the Reid avenue bunch were deemed off side. Liyanapathirana stepped up and fired across a 3 pointer from 35 meters out to keep his team within striking distance. (RC 17 – SPC 13).

It looked like the Peterites were handed another lifeline, when Royal’s Himantha Hirushan was sent to the sin-bin in the 52nd minute. But if the Peterites were dreaming of a magical comeback Sabith Feroze and his merry men had other plans as they aimed the bat firmly on the head of the Peterites to wake them abruptly from their dream. Despite a man less, the yellow card to Hirushan turned out to be somewhat of a catalyst as the defenders of the title completely dominated the proceedings thereafter.

It was the Skipper, Sabith Feroze who took matters into his own hands scoring Royal’s 4th try of the evening in the 54th minute. Royal’s marauding eight kept powering their way forward and after a few more phases inside the “Red Zone” the ball was sent out wide to Feroze who shoved his man away to touchdown mid left. Twominutes later, it was the other winger, Pasindu Fernando who joined the party scoring besides the left corner flag. Dulan only managed to convert the first of the two tries but the damage was already done with Royal firmly in the lead. (RC 29 – SPC 13).

With 10 minutes left on the clock, Royal drifted further away with Dulan Gunawardane putting over a 35 meter penalty to increase his teams tally to 32 points. (RC 32 – SPC 13).

As the clock ran out, tired and unable to contain the Royalists who were now in full flow, the Peterites gutsy challenge witnessed its dying embers as they didn’t have any reply to the now familiar, second-half, right-Royal onslaught. As time reached its end the referee blew the long whistle and with it, the hosts crowned themselves as back to back league champions. The first team to do so in 11 years!