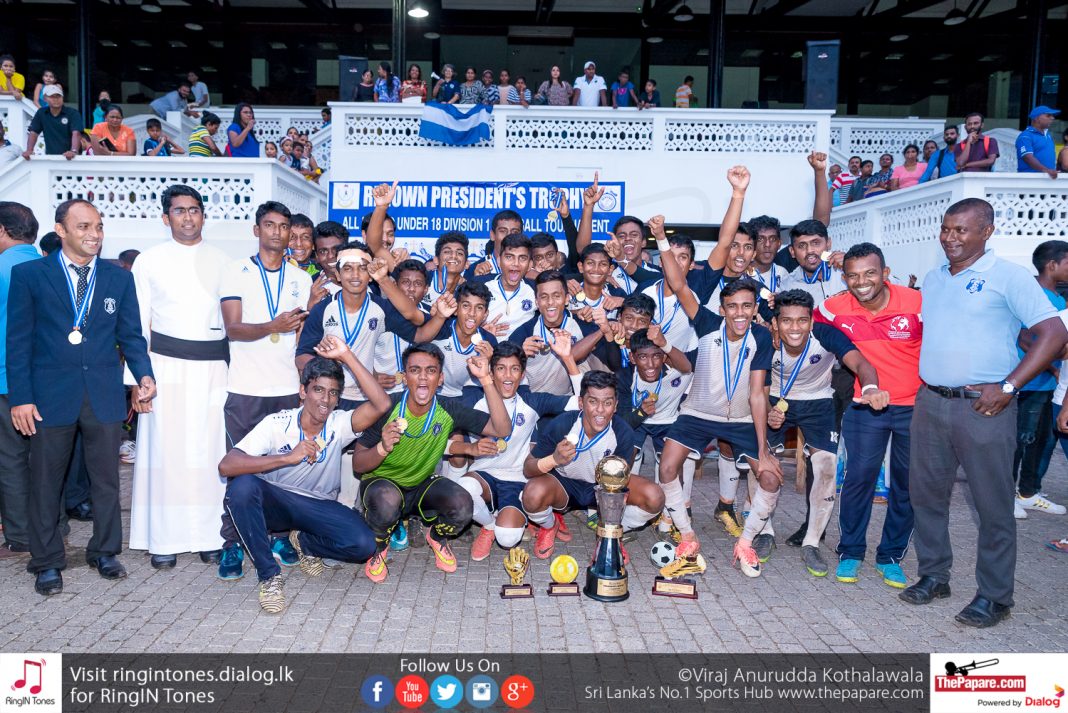 St. Peter’s College managed to hold off Zahira College to a goalless draw before winning on penalties 4-3 in the third…

Defending champions St. Joseph’s College thrashed Holy Cross College 4-0 in the quarter final before edging Zahira College 5-4 on penalties after it ended 3-3 in a thrilling encounter to book their place in the final.

Both teams took their time to adapt to the new ground conditions while St. Patrick’s almost paid the price for being too lazy as Asela Madushan tried to sneak in a goal as St. Patrick’s goalkeeper Kijuman Rajith waited for the ball to get to his hands instead of rushing in.

Both teams started to up their tempo soon after St. Patrick’s tried some long rangers to trouble the Josephian goalkeeper.

But St. Joseph’s made it count at the other end when Chalana Pramantha delivered a pin point cross into the penalty area to Chamath Rashmitha to volley the ball past the defenders to score in the 11th minute.

St. Patrick’s replied to the early goal in emphatic fashion to draw level in the 16th minute. Hamilton Haynes sighting the goalkeeper, Shamalka Kurumbalapitiya being out of position unleashed a 35-yard effort to score a stunner.

St. Patrick’s looked the better team after the equaliser. The defence looked organised after a nervy start while Regikumar Shanthan led the charge upfront alongside Nirmala Christeepan.

Madushan was kept quiet by a stout St.Patrick’s defence but the star player did look dangerous whenever he was left with some space as he went on to trouble the post. Both teams looked a bit weary as the referee blew the whistle to end the first half.

Asela Madushan restored the lead for St. Joseph’s with a wonderful individual goal in the 45th minute. Moving to left wing, he danced past three defenders and cut to his right twice before unleashing a low effort to beat the keeper, the type of goal which made Coutinho famous.

ThePapare.com reliably learns that Zahira College Head Coach Mohamed Roomy is on the verge of taking up the Head Coach…

St. Patrick’s, after making multiple positional changes, had no answer for St. Joseph’s onslaught as they looked all at sea losing its shape in the defence.

The frustration mounted with every passing minute as needed tackles started to flow in. St. Patrick’s skipper Shashikaran Abeeshan had a brain freeze as he stamped a Josephian player to earn a straight red and leave his team reeling with 10 men.

Madushan doubled his personal tally and hit the final nail in the coffin in the 65th minute when he tapped the ball into an empty net from 5 yards out when the goalkeeper made a mess by over running the ball and losing control.

Things got nastier in the middle when Salinda Cooray stopped Shanthan from behind prompting aggressive reaction from the St. Patrick’s playmaker. After the resulting altercation referee Tharanga Pushpakumara gave both the players straight red cards for the misconduct.

It was just a matter of time as the lads from Jaffna never looked like scoring a goal as St. Joseph’s played down the time. In the end, St. Joseph’s managed to register a comfortable victory against the boys from Jaffna to retain the title which they won after two decades last year.